I have a fun, new weekly project to share with you! I am working with Bona (sponsored) right now to refinish our almost 60 year old floors! I have some floor refinishing before pictures to share with you, and I’ll be talking about the process as we go, as we’ve experienced it,especially compared to the first time we went through it 7 years ago. First, though, I want to give you some back story behind it.

When we moved into our house almost 18 years ago, there was laminate flooring on the main level and new-ish ( 4 year old ) carpet upstairs. We were told by the owners we bought it from, that the person they bought it from, had cats and a lot of “stuff”. According to them, they were told that due to cat staining, the hardwood floors were not salvageable, and to remedy it, the previous owner primed over the wood floors and then put alternate flooring over the top. i.e. carpet and laminate. So for years, we knew there was hardwood under there, but we really weren’t sure how bad they were. When we did our kitchen remodel, we found the primed hardwood under the laminate, but they were primed, and did smell faintly of “cat”. We had thought about taking the chance to refinish those at the time, but there wasn’t any wood in the kitchen, and we wanted continuous flooring. We didn’t have the funds at the time to take a chance on them, so we opted to go right over with new wood. 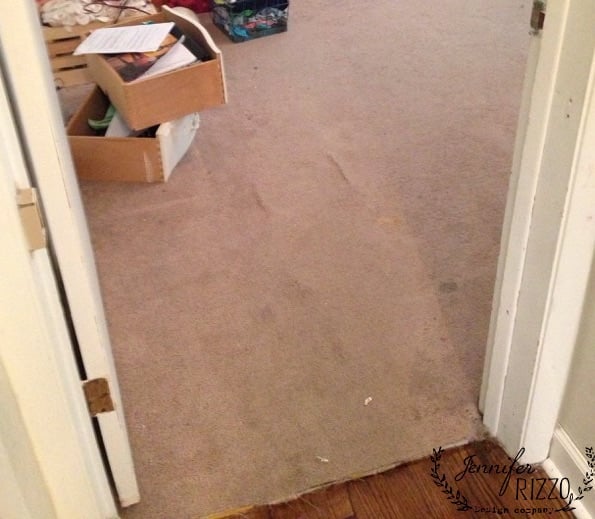 That was when I fell in love with hardwood flooring. I loved the feel under my feet, the warm richness of it, and how easily it could be cleaned. I started to get obsessed about our upstairs and the possibility of what was under there. Our carpet was getting to the point where we kept saying we should really replace it, but we couldn’t decide. We kept going back and forth about pulling up the carpet first and seeing what was under there. I would cut secret, little holes in our carpet in various places and peek underneath and try to see if I could tell what kind of condition it was in. We finally hit the 23 year mark with the carpet, and let me say, there is a reason I don’t show our upstairs very much besides the fact my kids don’t have clear floors, it’s because our carpeting was embarrassing. It was dirty, it wouldn’t come clean, and after years, it stared not only getting ripples in it, but it has had everything from paint, to nail polish, to homemade slime on it. It was trashed. 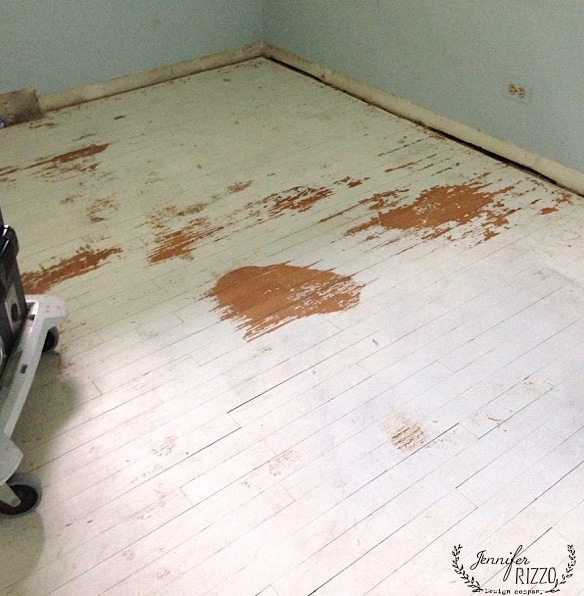 We decided to take a chance last summer to do the hallway, which was the worst from high traffic. It was a DIY job, and hubby did a nice job. So we had hope. After talking to Bona, I knew there was a chance for the bedrooms, and we decided to go for it. The other thing was Bona assured me that they have a new dustless system that meant there would be no dust. I kind of didn’t believe them at first because the two things I remembered about having the downstairs floors done was that 1. the dust was horrendous and we had to have our vents cleaned after, and 2. the smell from the stain and polyurethane were so bad, we had to move out for 3 or 4 days. I agreed to go with them because they have a new water-based low-voc system of stain and ployurethane that is healthier and better for the environment. I was all over that. Hubby pulled the carpet out and in every room we were greeted by primed floors that were flaking, and we thought we could see a few darker, possibly stained spots through the primer, but weren’t sure. 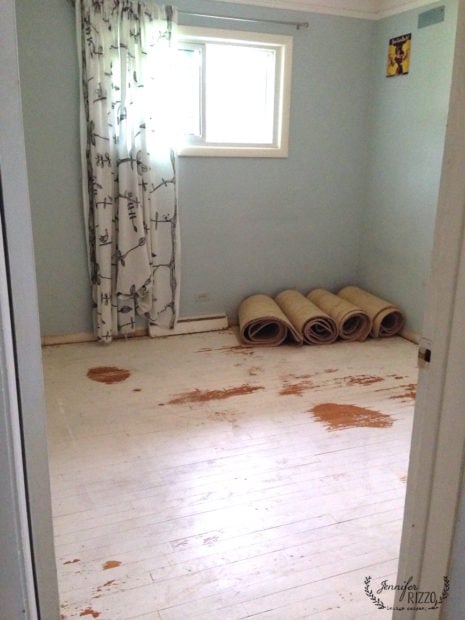 Jay showed up from Exquisite Flooring and he said while he had seen purposely painted floors, he had never seen floors primed like ours in all of his years of doing floors. It had me a little worried, but he was really confident he could handle them. Replacing an entire room of wood at this point wasn’t really in the plans. 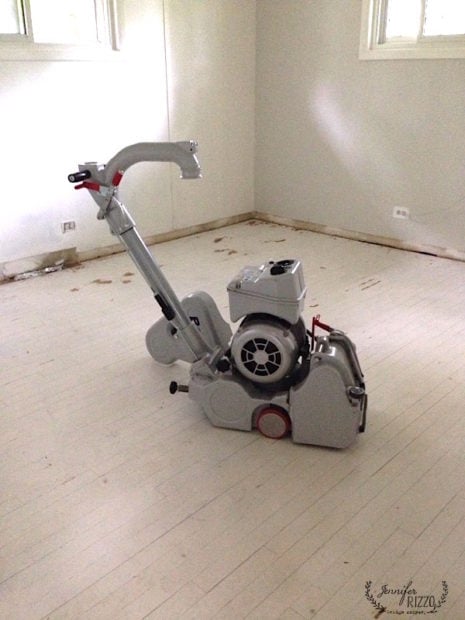 I have to admit, it was a bit of a nail-biter when he started each room to see if the floors were good underneath. 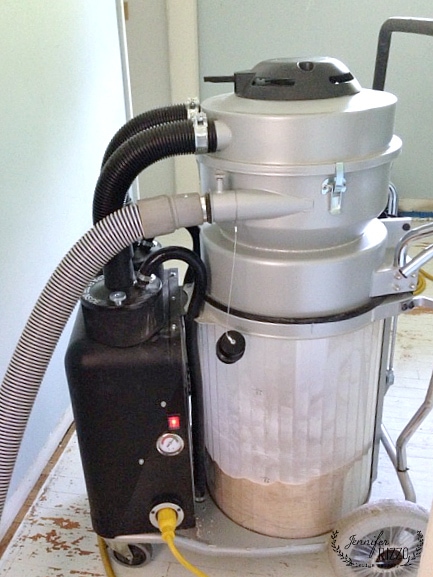 And, I didn’t believe it, but it was completely dustless! It was actually about the coolest thing I have ever seen! Everything went right into the giant canister. This seemed so easy compared to compared to our floor refinishing before,when everything had grit on it for months. 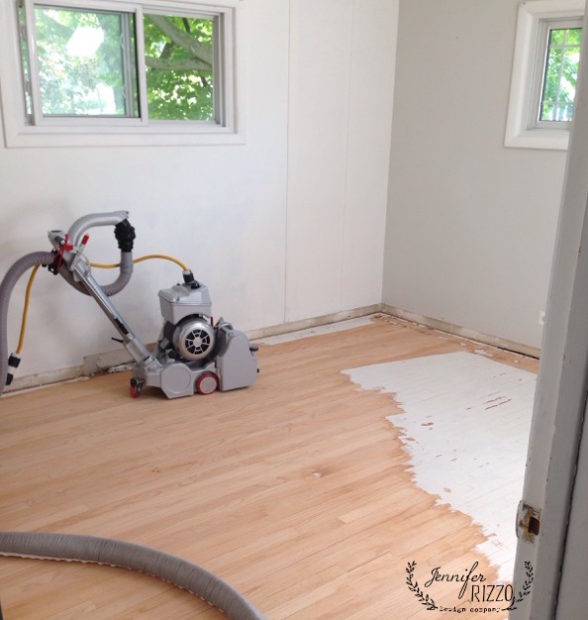 And then Jay told us to come up and peek in…holy cow! The floors were amazing!! On all three floors, there were only two small cat stains. 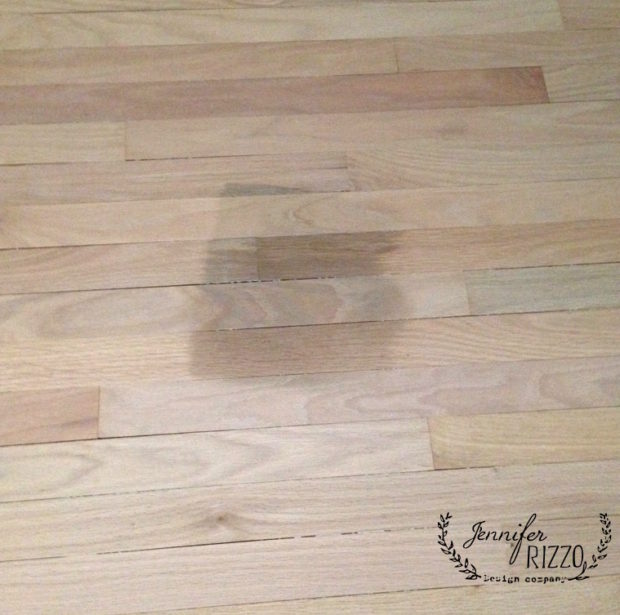 One back by the wall in the master bedroom, and one in the smaller bedroom. By the time Jay was done sanding, they were faint and light gray. We knew we were going with a dark stain, so it wasn’t even a concern. We felt like we had hit the floor lottery!!!! 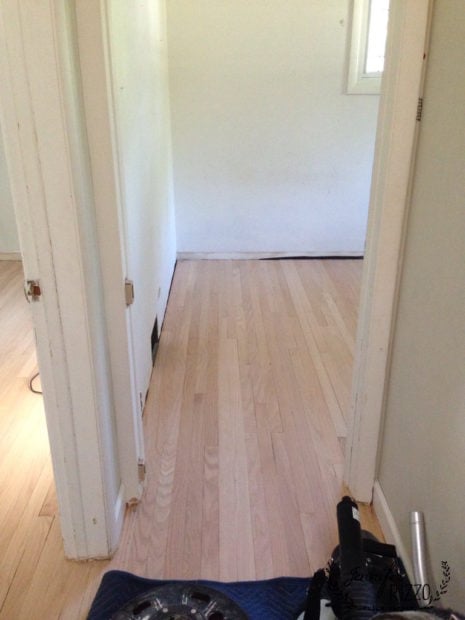 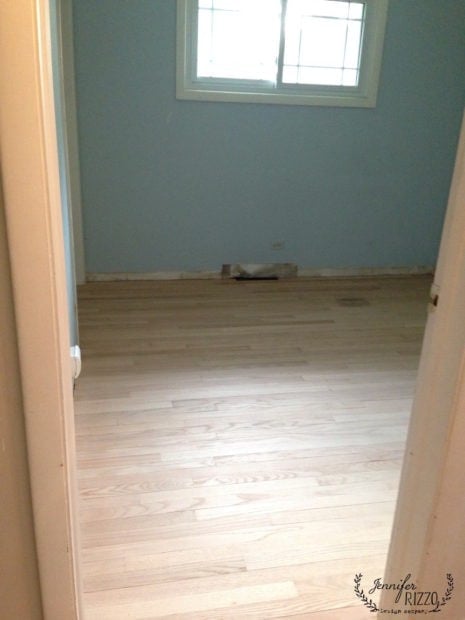 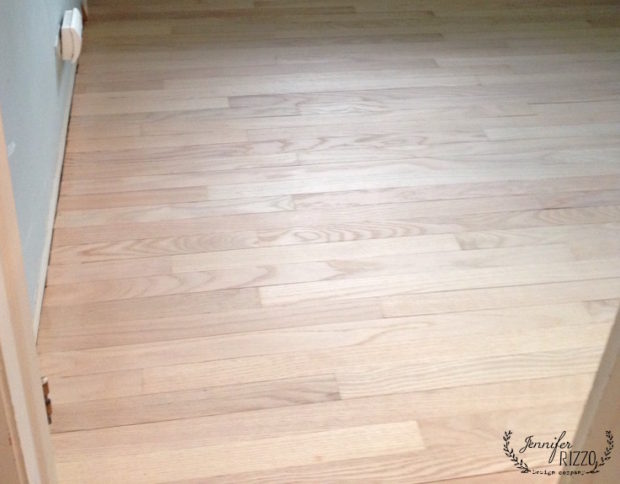 I am so excited and over the moon!! In the next post, I am going to cover picking the stain colors and staining the floors.

This post is sponsored by Bona flooring, all opinions are entirely my own