I became obsessed with the idea of removable wallpaper in the kitchen, and I really wanted some with watercolor peaches on it. Much of today’s wallpaper is removable, so I thought it would be so fun to have something with a bright colored pattern on it, and if I became sick of it, I could just peel it off. We don’t have a ton of wall space in our kitchen, but the area over the stairs to our sub-level was perfect! 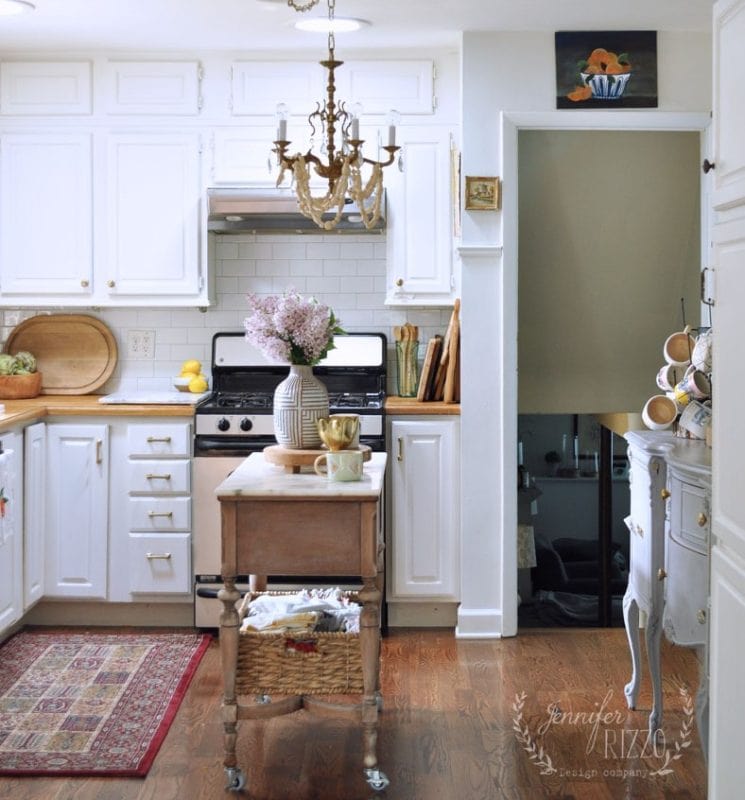 The new removable wallpaper is making it so much easier to have fun with it, and not as big of a commitment as it used to be.  I know people who refuse to take down old, outdated wallpaper because it was so hard  and expensive to put up the first time!

Because of the colors and subject, peach-patterned wallpaper seemed like  would fit well in the kitchen. The thing is, I couldn’t find one that I liked exactly, and thought that since I was a licensed artist, I should really suck it up and design my own. I was a little intimidated, because it involved doing a complicated pattern repeat, which I hadn’t really done before. While I’ve been selling fabric on Spoonflower for a few years now, the patterns I’ve been creating from my artwork were a bit more on the simpler side. Creating a more detailed repeat for fabric or wallpaper is something I’ve always wanted to learn, so it seemed like a good time to just to learn it!  I watched quite a few tutorial videos on Youtube, and decided to give it a try. 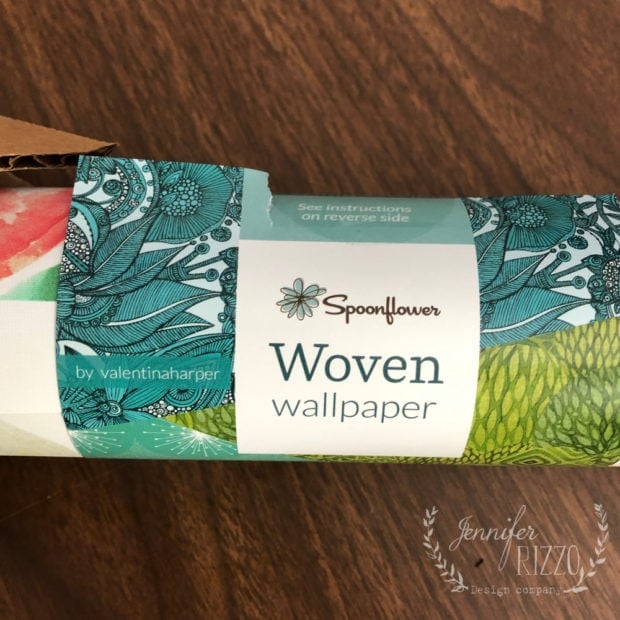 After ordering samples, and tweaking it a bit, I came up with a design that I loved.  I knew I was excited, but it was even more exciting when it arrived in the mail, and I opened it, and it was everything I had hoped for! I ordered a roll of the woven wallpaper (it was close, I probably should have ordered 2!). I could have bought pre-pasted, but peel and stick sounded waaay more awesome, and easy to me. I will admit, it has been quite a few years since I’ve hung wallpaper. I was really glad I wasn’t doing a big section my first time out. 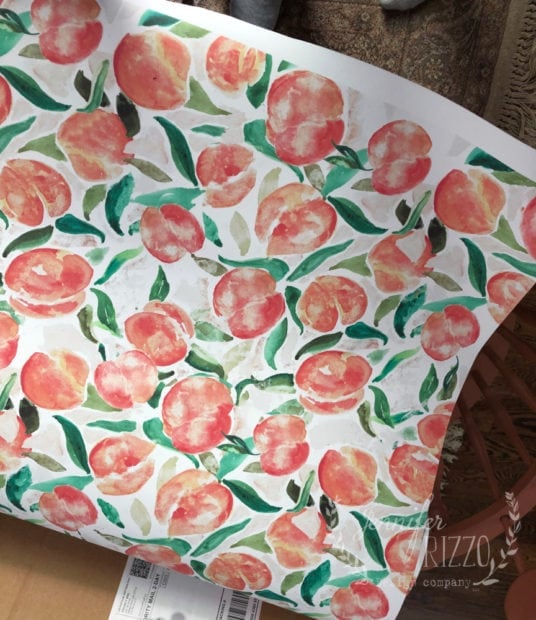 It wasn’t hard to put up, just cumbersome. Until I got the hang of matching the repeat pattern, it was a bit of a struggle, and it took me a minute or two to figure that out. 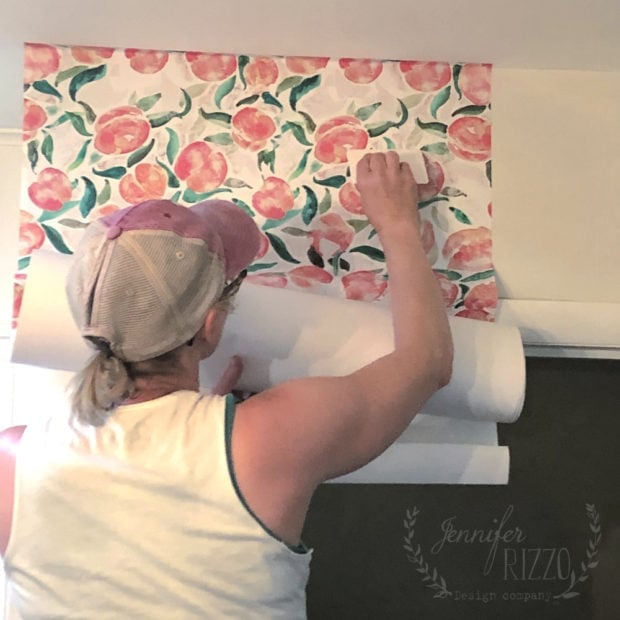 It would have been much easier with two people (instead of having one person hang, and the other take social media pictures, but you gotta do, what you gotta do.) 🙂   You do need someone else to help eyeball if it’s straight or not. To help it adhere to the wall, they sent a little plastic scraper that helped stick. I ended up hanging it, and then trimming it straight against the ceiling, and wall with a razor blade knife. 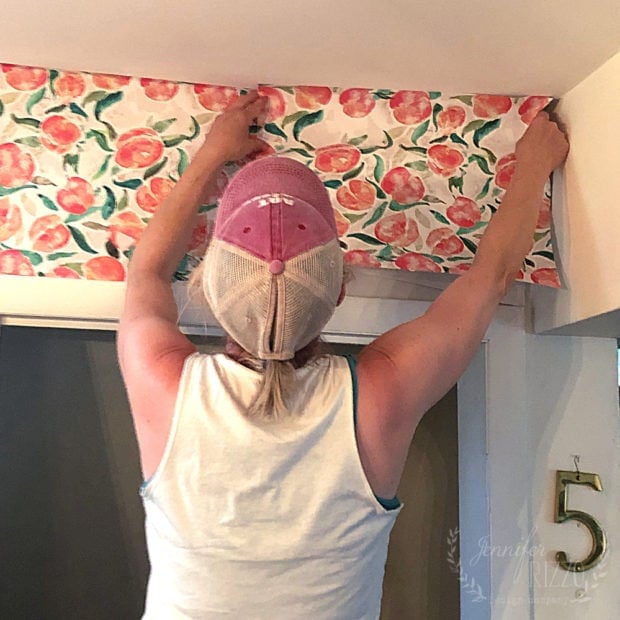 Now that it’s up, I love how it looks! I paired it with the “new” vintage rug. The colors are perfect together!  It gave my kitchen a nice mini-makeover. 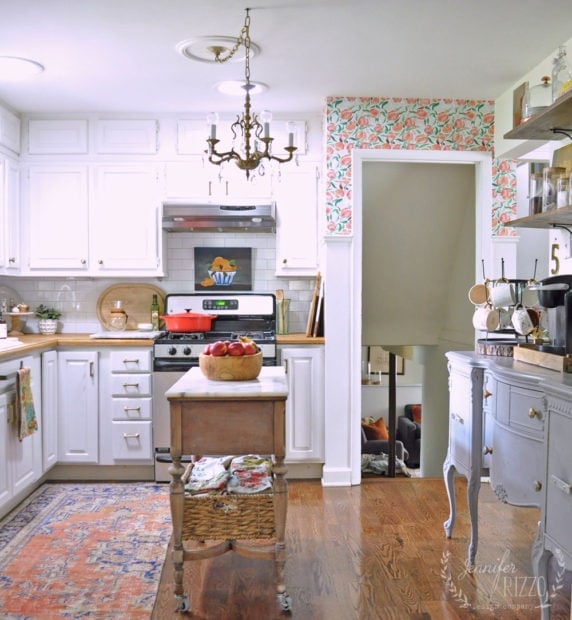 It really changes the look of my entire kitchen. I love the added bit of color, along with my artwork over the stove (see how to make that here.). 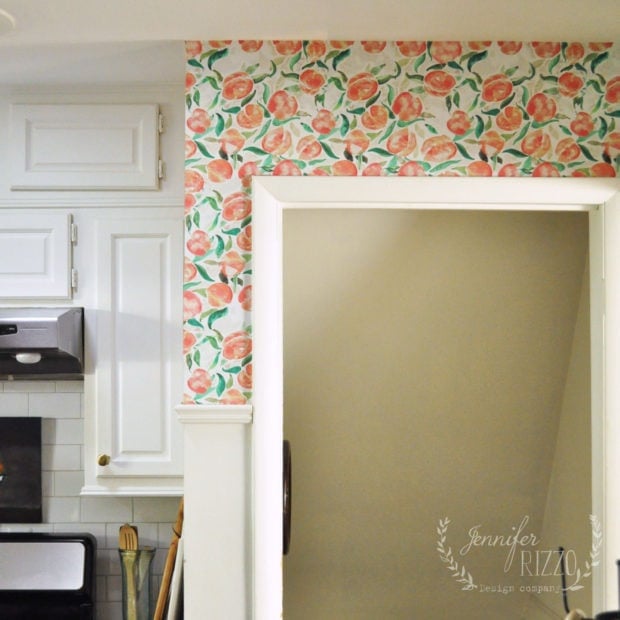 I also ordered some dishtowels in the same fabric so they would coordinate… I am curious to see the quality, and how the image looks. I’ll show you those once they come in. You can find the wallpaper here, and the coordinating fabric. I also have this pattern on a pillow and a few other products on Society 6. 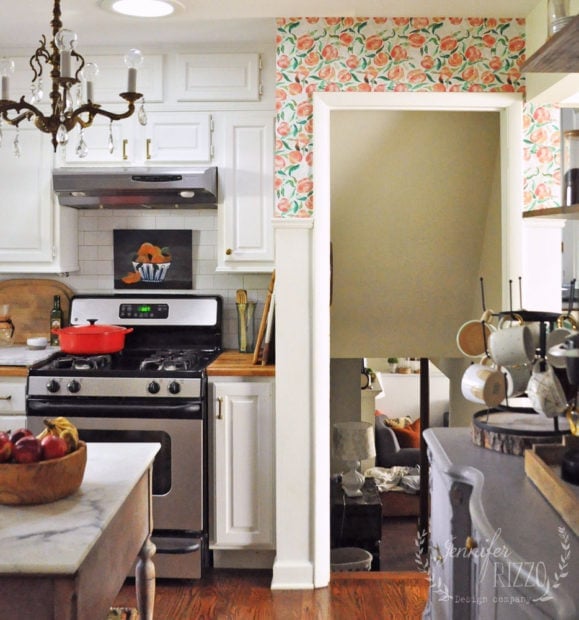 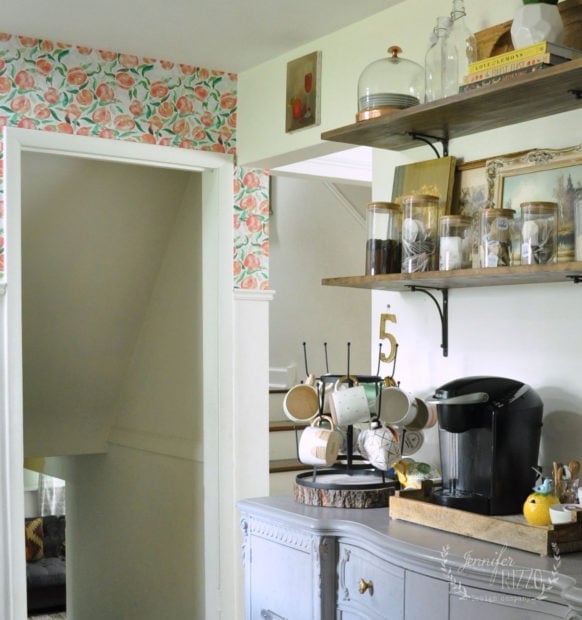 I am interested to try some other patterns I’ve created as well in other places in my home.

Have you jumped on the wallpaper bandwagon yet? I have to admit since it’s less of a commitment than it used to be, it’s a much easier trend to go with.