I’ve seen rustic paper mache bowls popping up all over, and they look so cool. I  love working with clay and mache products, so I thought I would give it a try to make a paper mache bowl DIY of my own and share it with you with another Episode of Let’s Make Something. You can watch the video below for a more in-depth details, or go by the step by step images below. 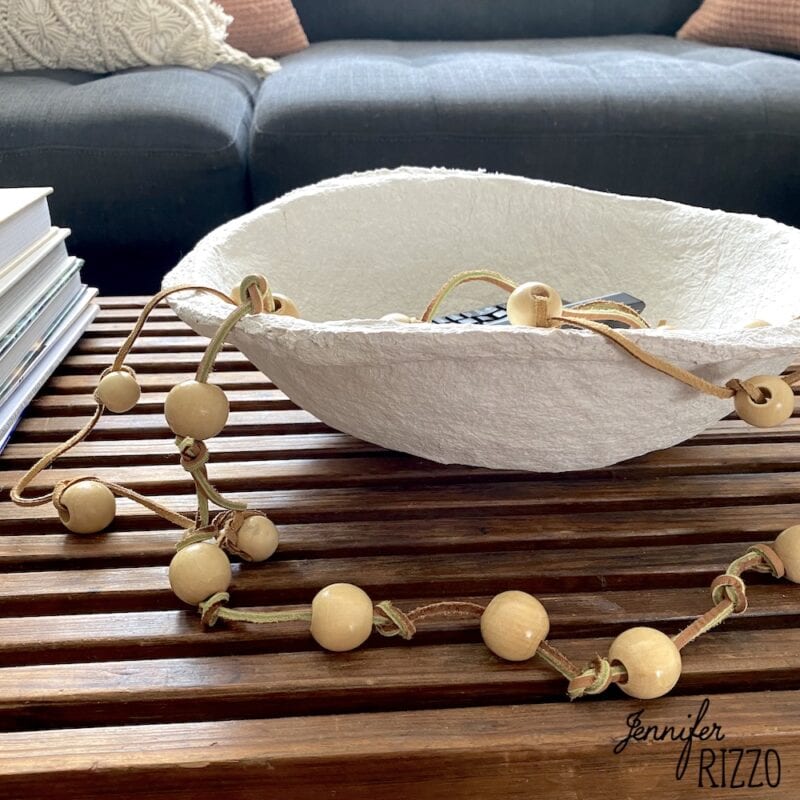 While some DIY paper mache recipes call for flour, white glue and paper napkins, this bowl was fun and easy to make using a pre-mixed paper mache pulp product I found. Even though it took several days of dry time, my DIY paper mache bowl turned out to be really cool. Even though it’s not for food use or wet applications, It’s such a fun decorative piece… we actually keep our TV remotes in ours! 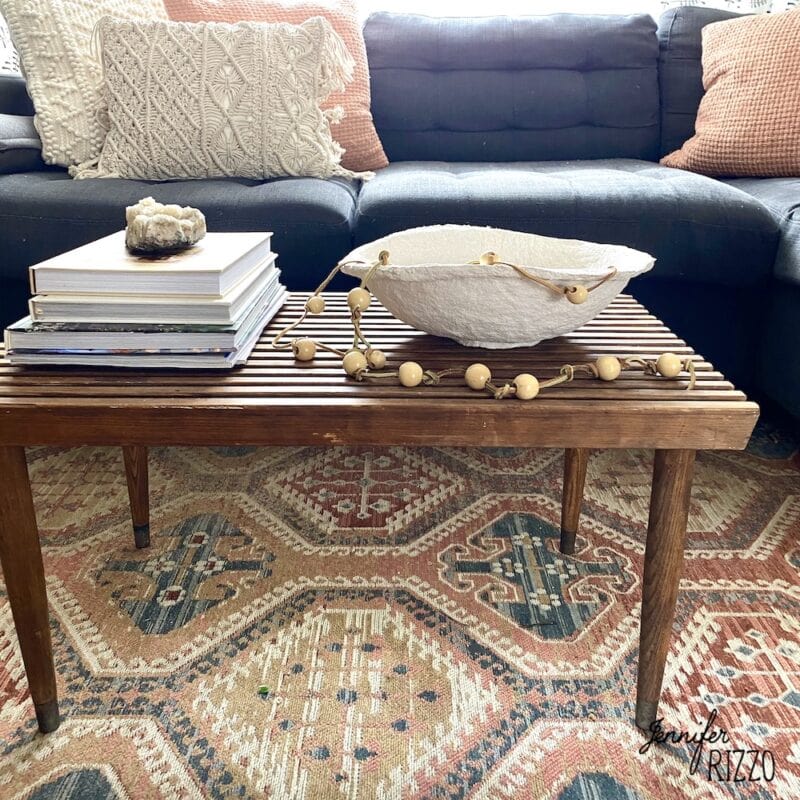 I have the instructions below and a few tips that make the process much easier! You can also watch the video for the full instructions and the bonus video to see how the foot of the bowl  and  rim of the bowl is created up-close. There are lots of ways to makes and style these paper mache bowls as seen on both Instagram and Pinterest.

To make your paper mache bowl. you’ll need: Paper mache paper pulp pre-mix, a tub to mix it in and water, small bowl or jar with water , clay tools, a large bowl mold wrapped in plastic wrap or aluminum foil as a “mold”, a dust mask and possibly eye- protection, paper towels. Find supplies here. I grabbed a few in progress still shots from the video so you could see a few more steps. 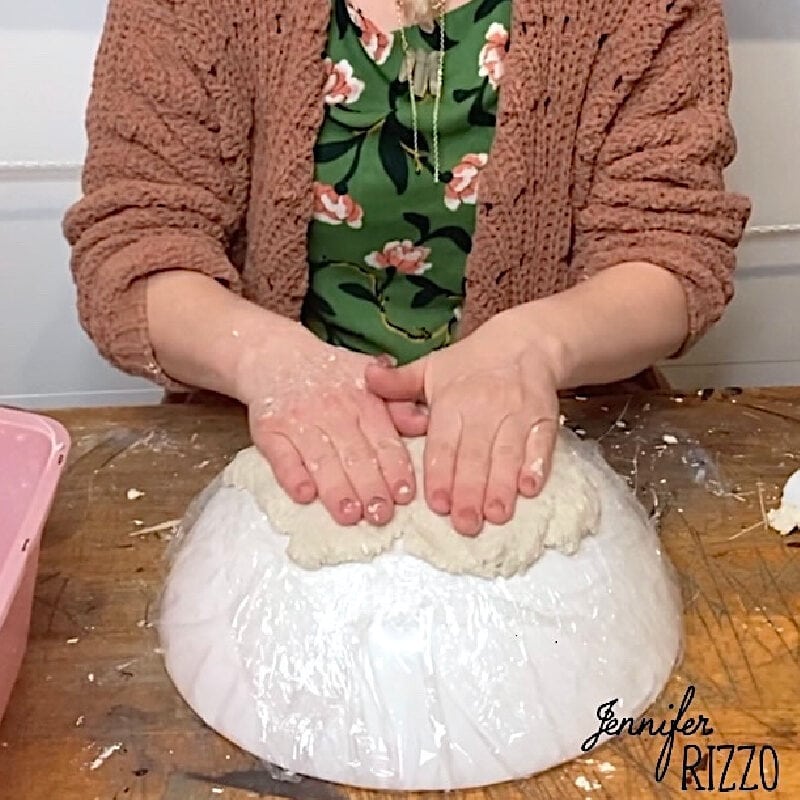 Old School Paper Mache is Made with Newspaper Strips

This paper mache project is different than the old school paper mache from when I was a kid. We would take newspaper strips, equal parts water and flour to create a paper mache paste, cling film and a bowl  for a mold (or even a balloon to make a pinata!). You can still make a paper mache bowl that way like mixing the flour and water until it has the consistency of pancake batter, and then letting your newsprint soak until its somewhat saturated. Once the strip of newspaper is saturated, create layers by adding one strip and crossing over another. Continue to build up layers of soaked newsprint paper, smoothing as you go. Let it dry for several days, and then it can be trimmed with scissors and then painted with craft paint and sealed with decoupage medium or varnish.  While this paper mache technique is fun (and messy), it has a few downsides… One, the layers can de-laminate when painted and after the first layer, if the layers are too thick, it can mold instead of dry. Two, the paper can easily fall a part when using, or if it’s not soaked enough, won’t adhere to the layer underneath. The third issue or an organic one. Anything with part flour in it can attract pests and bugs that like to eat flour, so if you want to keep your paper mache bowl a long time, that could be an issue ( and if you have a gluten-intolerence, you may want to use a different recipe as well.). All I can say, as kind those were fun projects, but from a parent’s point of view, they were probably a disaster with a headache-inducing clean up. I might try this project again one day, but for now, I’ll stick to my pre-mix.

This  paper mache bowl is definitely a more mature, high end version. To start making your paper mache bowl with bowl with pulp dough, wrap your large “mold” bowl in plastic wrap (This will make it easier to remove your paper mache piece later. ) Set aside until your paper mache mixture is ready. Mix your mache compound according to the instructions squeezing the water into the mix. The mixture seems to kick up a lot of dust so wearing a dust mask is advised. Once your mixture is thoroughly mixed, and all of the small, dry lumps are worked out, start by  taking clumps and flattening them slightly. Mold them around the outside of the bowl until they are a uniform 1/4 to 1/2 inch. the mixture should be mixed thick enough to “grab the bowl”. Ifit’s sliding off it’s has too much water and needs more paper mixture. 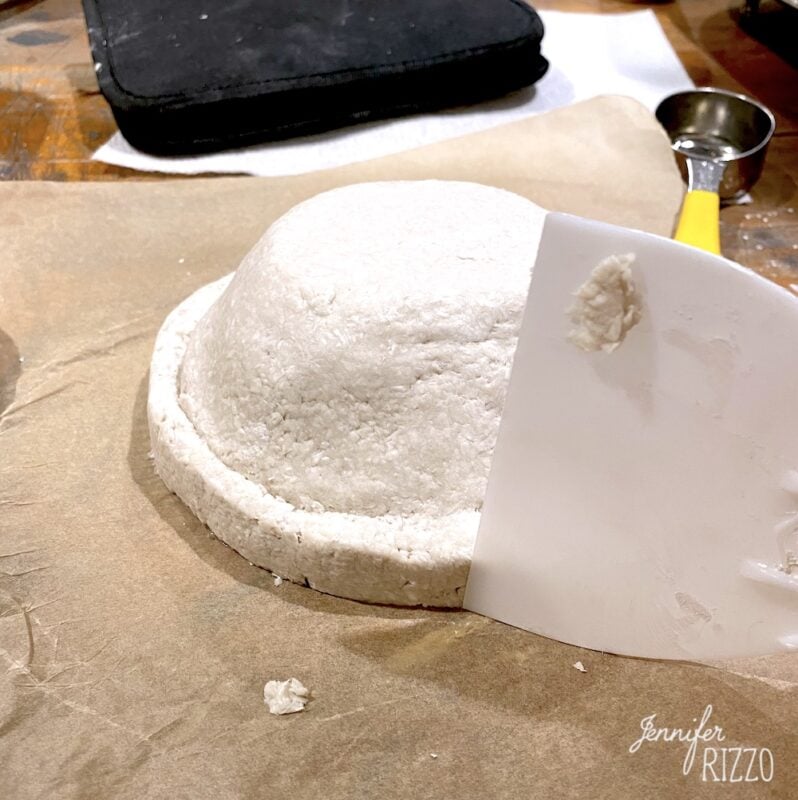 I found by placing paper towel or parchment paper  under the DIY paper mache  bowl before working made it easier to form the rim of  when making your rounded shape. 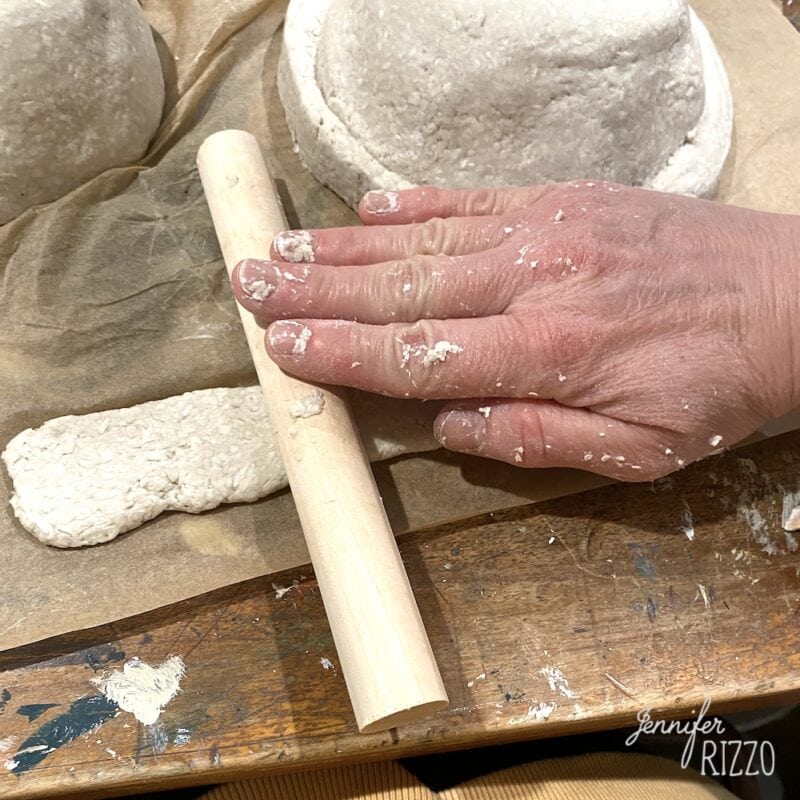 After the bowl is formed around the mold and smoothed out (This is where a small bowl of water comes in handy. Keeping your fingers wet help it to smooth and glide over the paper mache mixture.), make two “snakes” with the mixture and press them flat to form a rim at the top and at the bottom foot using your clay tools to help adhere them . 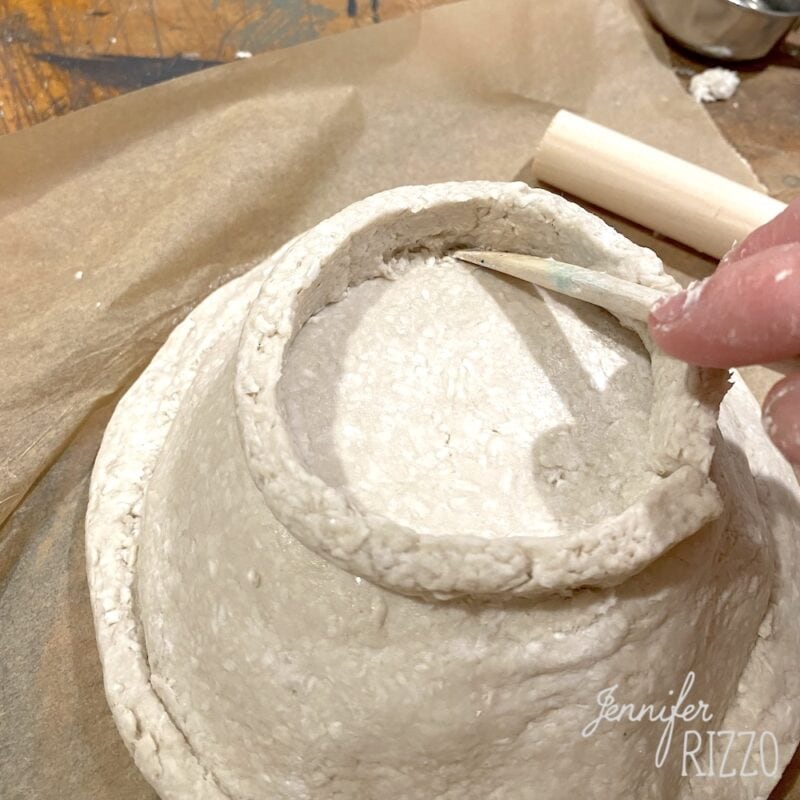 Once this step is completed, place in a flat place and let it dry over a few days. I placed a monitored fan on mine during the day to help it dry faster. 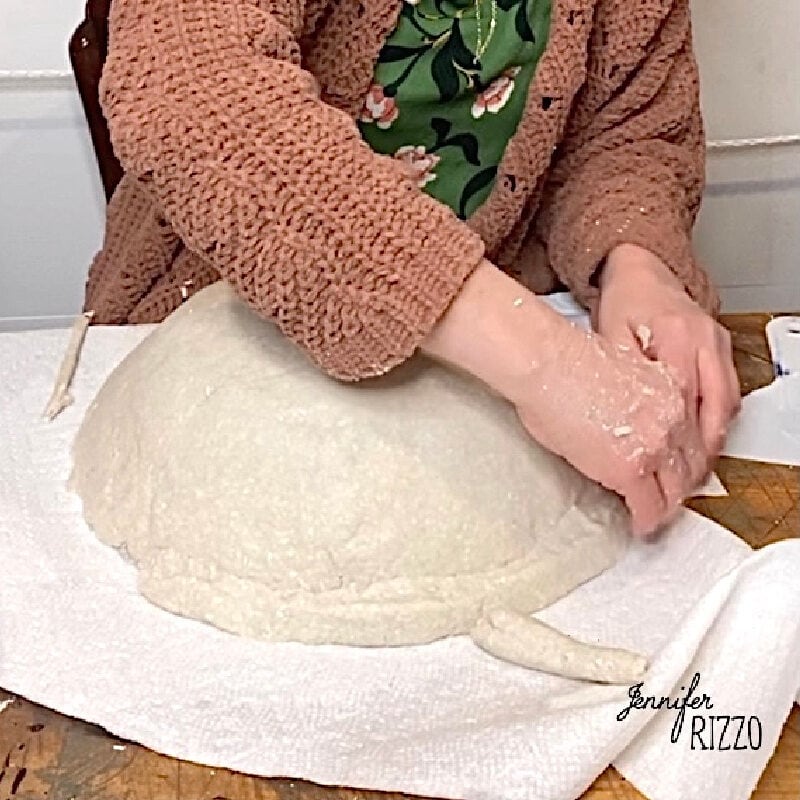 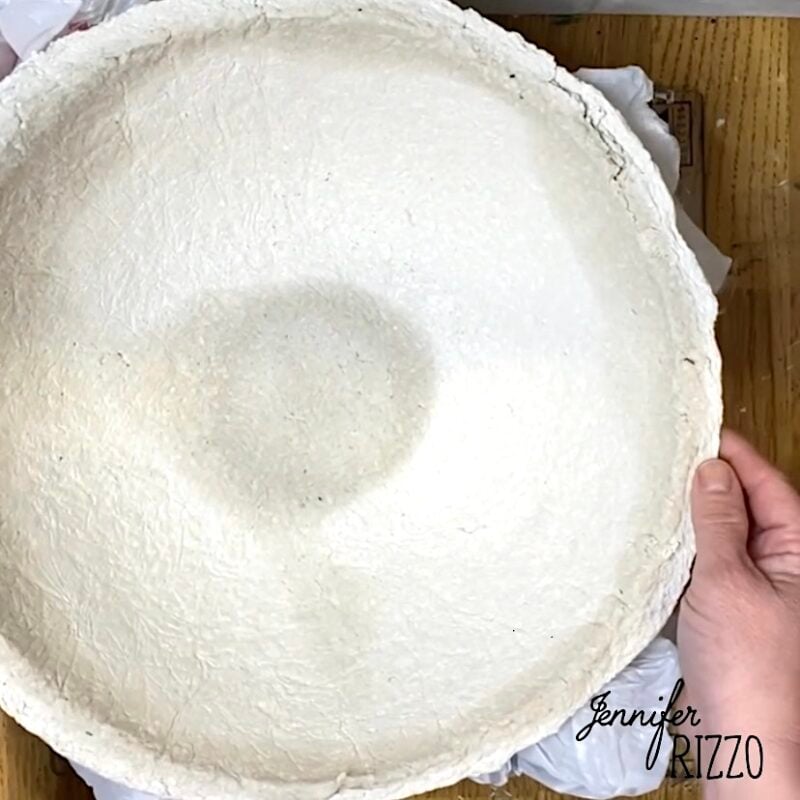 Once the bowl is dry, it can be painted with acrylic paint, sealed with clear sealer or left in its natural state. Use to display decorative items! I see these sell on Etsy for close to $100, so they are definitely worth the creative time to make one! I paired this with a cute handmade bead garland.

It’s been surprisingly durable and it was fun to make a paper mache bowl to really use. I really thought the family would have it smashed to bits in a few days, but it’s held up really well! 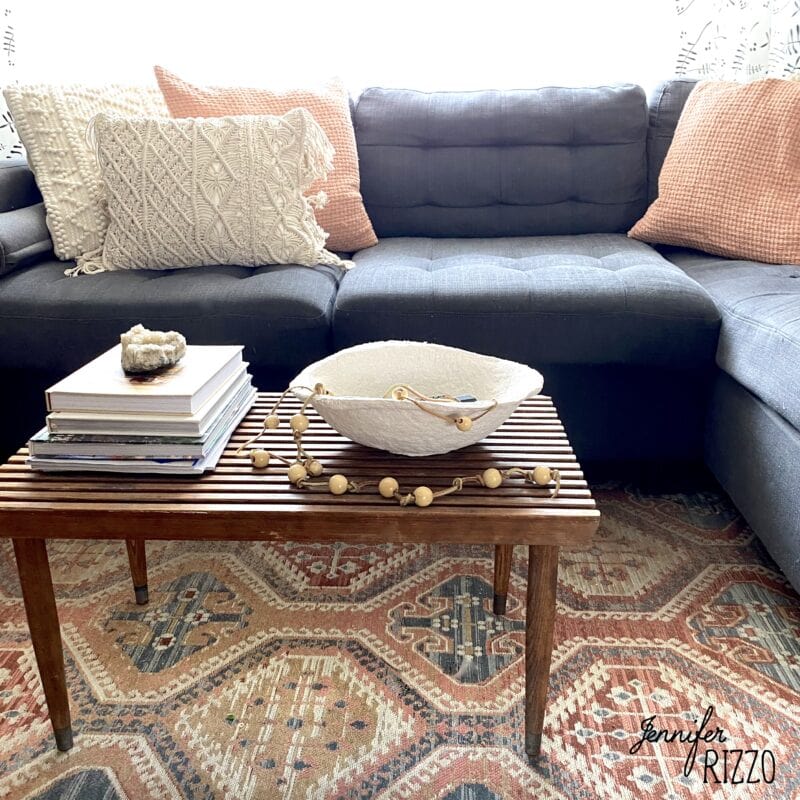 Have fun getting messy and creating something fun! 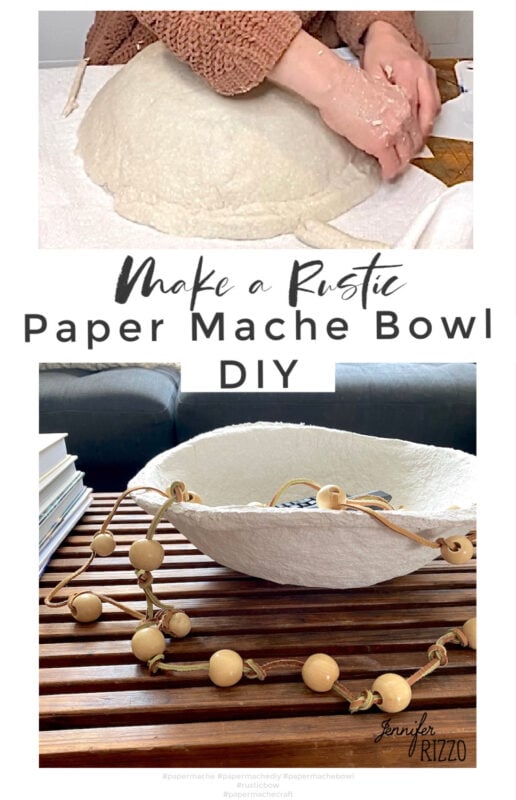