I had quite a few questions about my tadpole experiment and how to set up a backyard tadpole habitat.  I thought I would answer a few of them here.  You can also read about adding the new additions to the family.I am glad to see that many of you are as excited as we are about them… 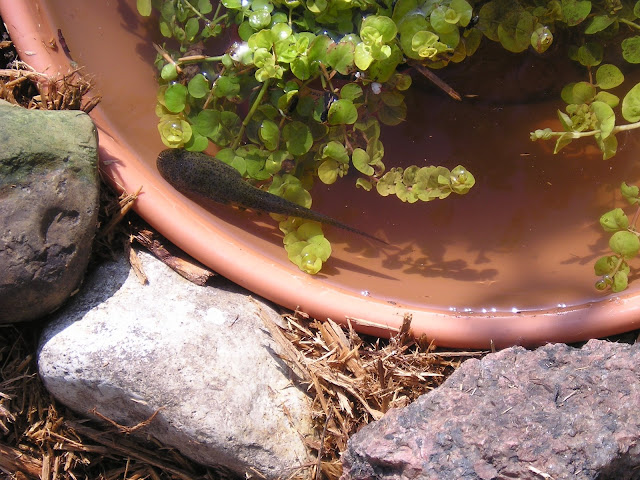 1. We really did buy the tadpoles! My mom has a huge pond and she buys them every year when she adds in  a Koi fish or two. When I found out that all they would need is  a bowl of water and  a plant, I thought it would be super cute for the kids to watch and learn about this summer.  They are Leopard and Green frogs which are native to IL.
2. We bought ours at  a local garden center that sells pond fish and supplies. They were $1.99 each. Not bad for some summer entertainment. 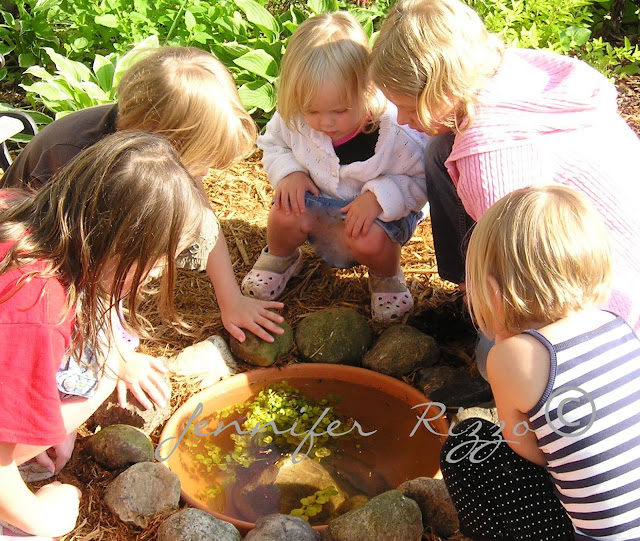 3.I only bought 3 because the bowl is only 18 inches by 8 inches. And I do change out the water every few days or at least add more so it doesn’t get stagnant or gacky. They seem tolerant to straight tap water, though my mom mentioned I might want to de-oxygenate it first by letting it sit.
4.We put them in an area where they have  lots of plants and cover so when they become frogs,  they have  a place to hide from predators. Hopefully they won’t venture out into the main yard and get run over by the lawnmower. That’s going to be a hard one to explain.
5. The plant we have in there is  called Creeping Jenny (ironic, huh?). My mom started to give me the Latin name first ( darn horticulturalists!). But all I heard was  her say Lypi.. then  blah blah blah as my eyes glazed over ( I am an artist…). She did say you could also use Water Parsley, Water Clover or even regular , old Impatiens. Take them out of the pot and float them. Leave the roots exposed however because the tadpoles eat the roots. 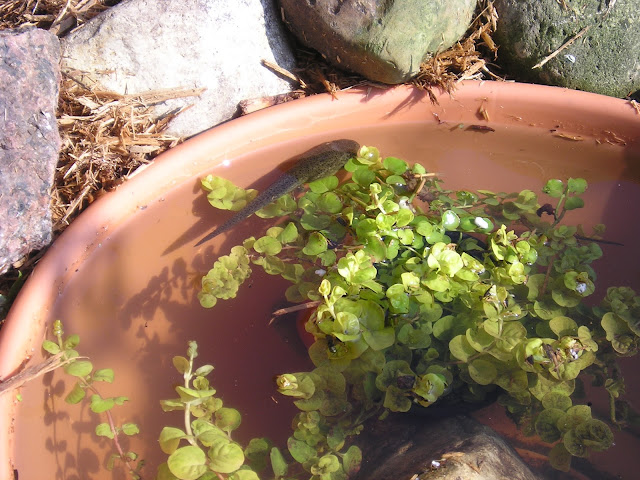 6. I associate Jake Ryan with the 80’s as well, but my girls said there is a character on Hannah Montana with the same name, so I am assuming it is an homage to our youth. All of the names were put in a bowl . Like I said before, we were a pick away from Stella, Pinky and Poopyhead.

7. We added mosquito fish/rosies once the tadpoles started leaving to keep up with mosquitos and eat the larvae. Here’s where you really need rocks, so the little fish can hide from the larger tadpoles. Our other option is a small solar re-circulating pump.

I hope this answers all of your questions! Feel free to ask if there is anything else!
jen
If you are reading this post at any other sites or blogs besides Jenniferrizzo.com, your rss feed,e-mail or in your reader this is stolen content.