If you missed the very first part of The Playset Project, you can see that here. If you’re just tuning in, my teen daughters and I are renovating our old, wooden backyard playset to a more age appropriate hang out for them. One of the requests my Middle had was that we do something about the area under the play set. It had a tire swing for years, and when the tire swing became too worn out, we put pavers under there where my Little would play with her fairy garden. Now it was  just a mess. So we decided to build a playset lower deck. 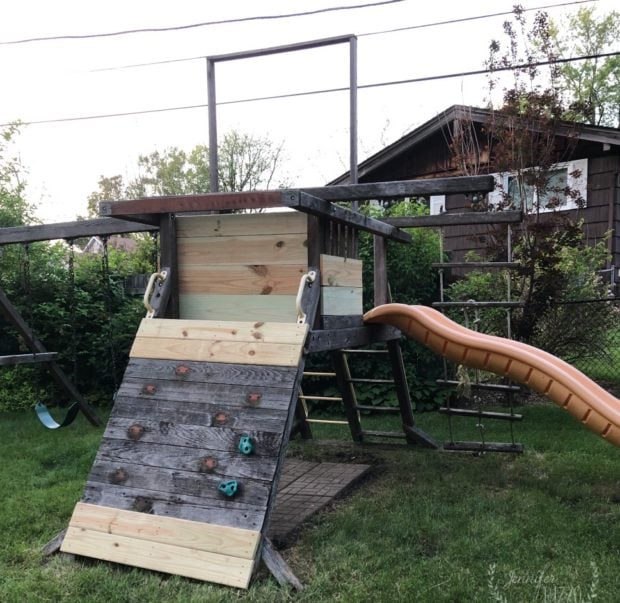 After we replaced the bad boards, and added the extra walls on the sides, we decided we would build a planked deck, and use the old pavers as foundation stones underneath. Now, I am a figure it out, DIY’er, so I am sure that what I did is probably not 100% by the book in terms of building. You may want to do it the real way if you ever decide to build one. 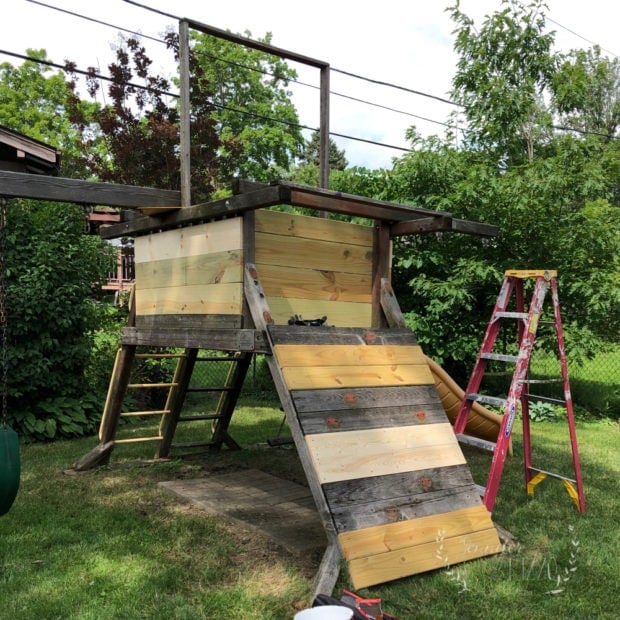 In building the playset lower deck, this was the part we had to use some of our muscle on. My Middle slept really well that night (and I did too.).

I do want to mention that if we were planning on a really long term stay for this playset, I would have done a whole compacted gravel base kind of a thing. Really this is for one, two years tops. 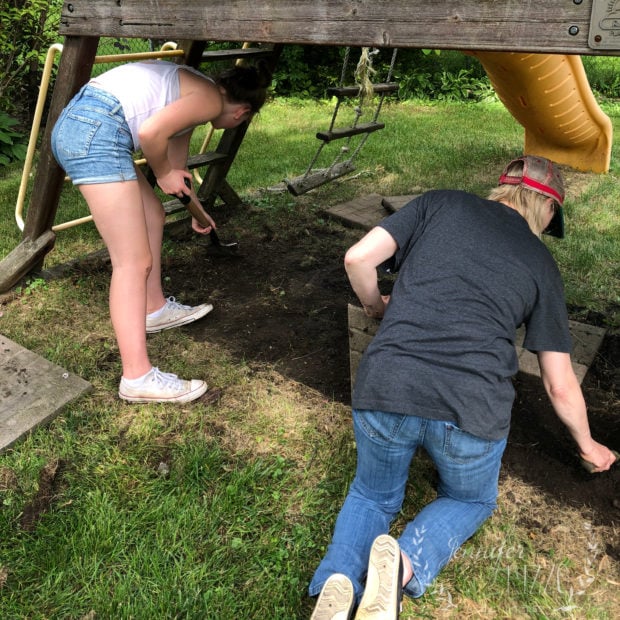 The first thing we did was level the area under the play set.

I positioned the pavers so they would support the lower deck. 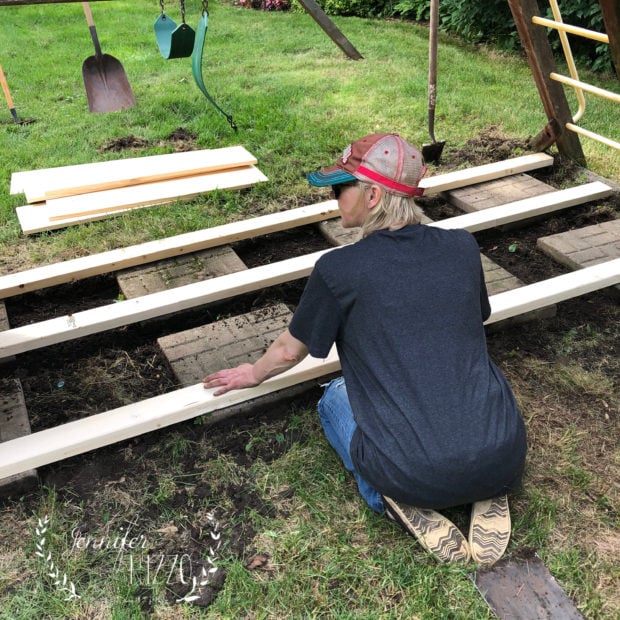 Three 2 x 4’s went across. The one was slightly off center so it rested on one of the blocks. All three had pavers underneath for support. 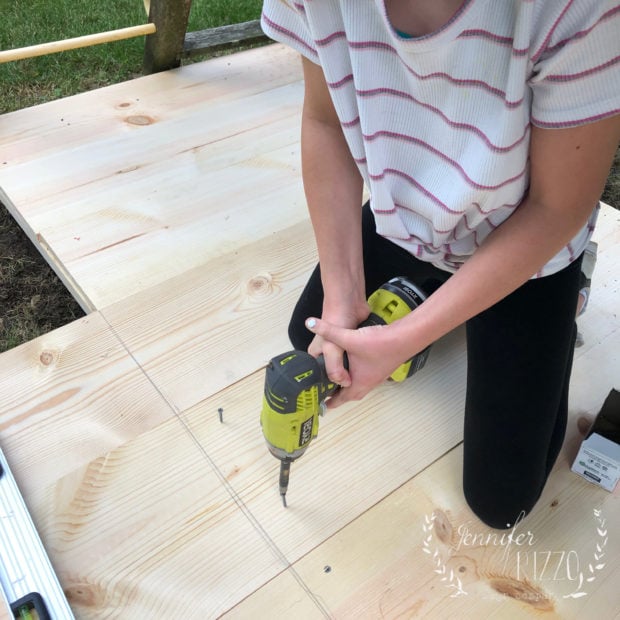 We screwed the planks into the 2 x 4’s we laid on the pavers. Most of the pieces we had cut at the home improvement store, a few pieces were a little on the long aside. The girls became really proficient at using the drill! 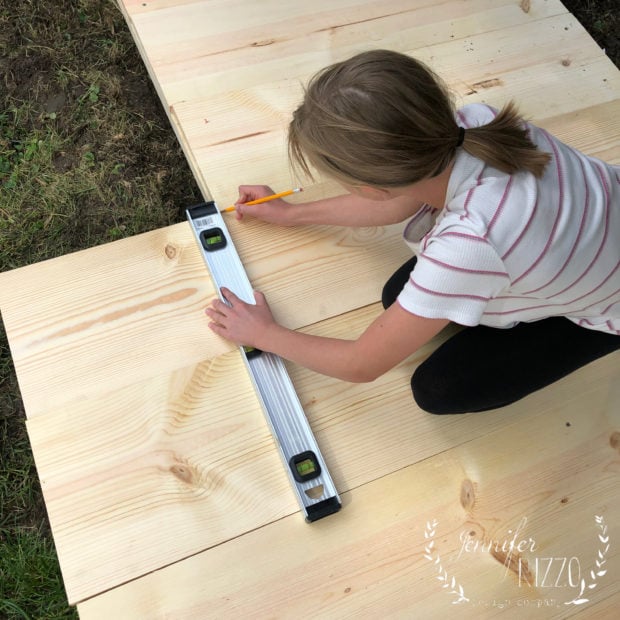 I had my Little use a level to draw a straight line so I could trim it with a saw so it matched the other pieces. 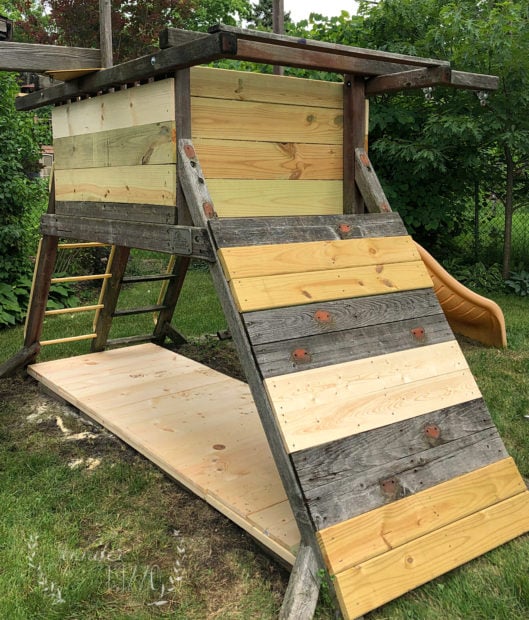 Once that was done, I secured it to the base of the play set for stability. You might ask why I just didn’t use longer boards and start with attaching it to the play set bottom. I did think about about, but 10 foot boards were the longest we could fit in our van.

The girls were so proud of themselves!  Next we went over some design options with my Middle before cleaning and painting!