When we built our back deck and gazebo area earlier this summer, I went back and forth about whether or not I wanted a canopy on the top. The original had been chewed up while it was stored in the shed years ago, and I kind of liked the idea of looking up at the trees during the day and the stars at night.  I soon had to give up on those romantic notions. The birds were trashing the deck surface. I am pretty sure they were just using it as their personal potty. I needed an inexpensive, easy no sew canvas canopy because I wanted to be able to use it right away and not drag out my sewing machine. I thought about getting a sun sail like we have over our other deck, but they weren’t quite the right shape or material.  I finally decided to use heavy cotton duck fabric, and find away to over lap it over the top. The other thing is our gazebo has this fancy finial top on it  that’s not really my style. My new (almost) new sew canvas canopy would kill two birds with one stone (I know, bad pun.). 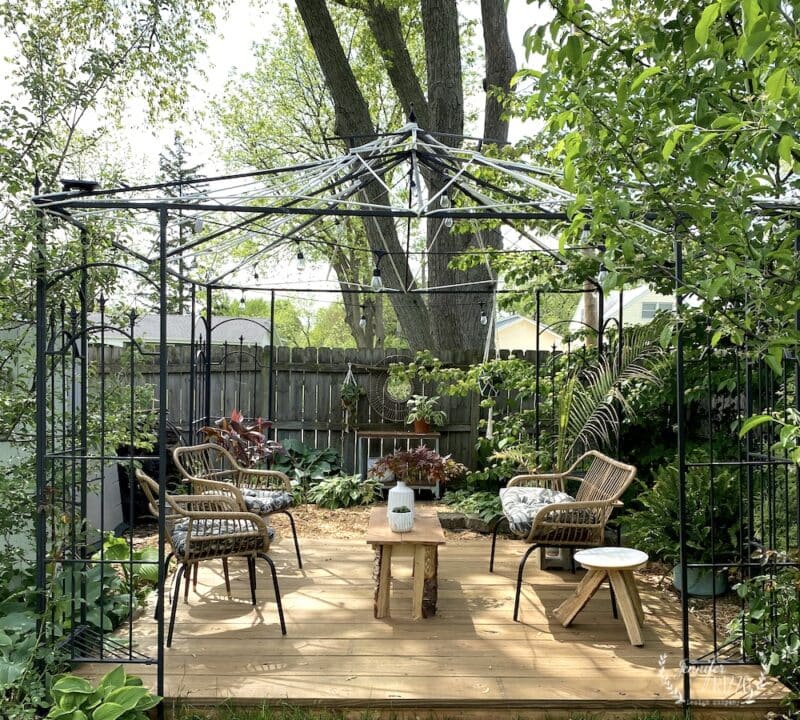 You guys. It was so bad and gross. I was hosing it off almost daily and I was over it. And there are purple berries on the tree above, so you know know it was staining the surface like crazy. 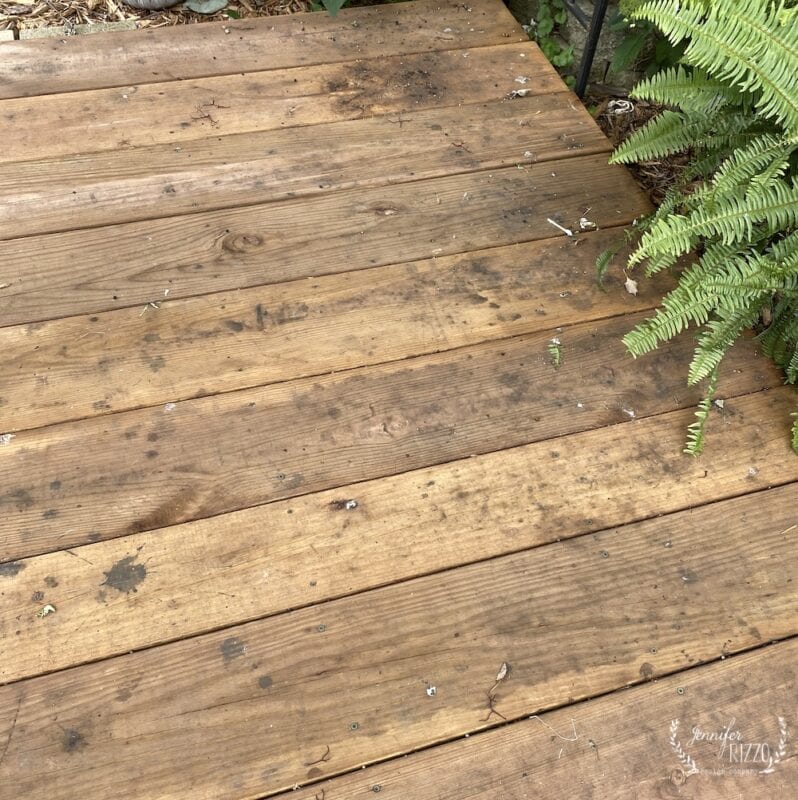 I decided a canopy was the way to go and make it through at least the end of this year. 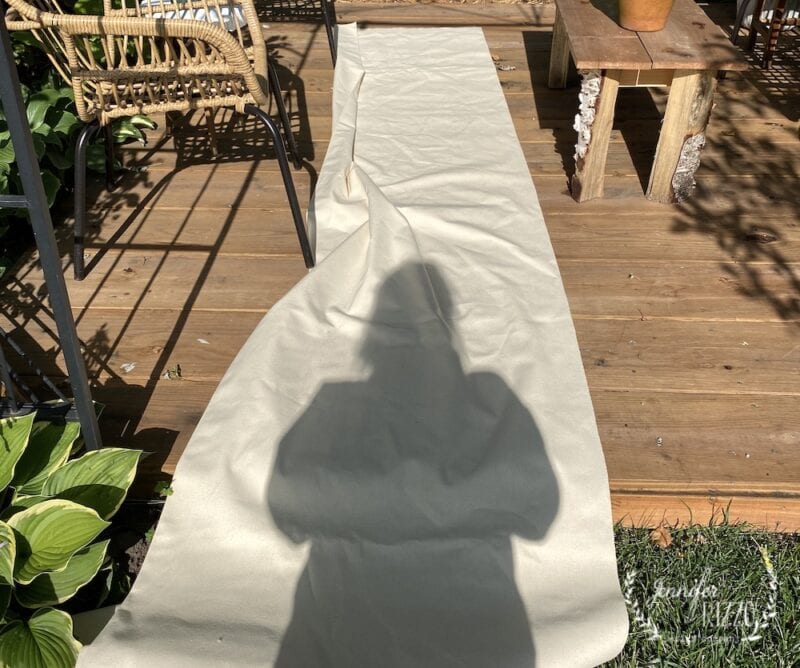 I measured out two lengths of 54″ wide cotton duck to stretch almost the full length of the canopy. I removed the finial part at the top, and cut down the fun boho rope accent. It made me sad, but it had to go. The big question was how to attach the canvas so the wind wouldn’t wreck havoc on it and it’s wouldn’t ruin the gazebo. For a hot second I thought about punching holes along the edge and looping it so it looked a little nautical, and then I realized I was thinking crazy and that was going to take forever.  We ended up using a grommet kit to add reinforcements on the corners. 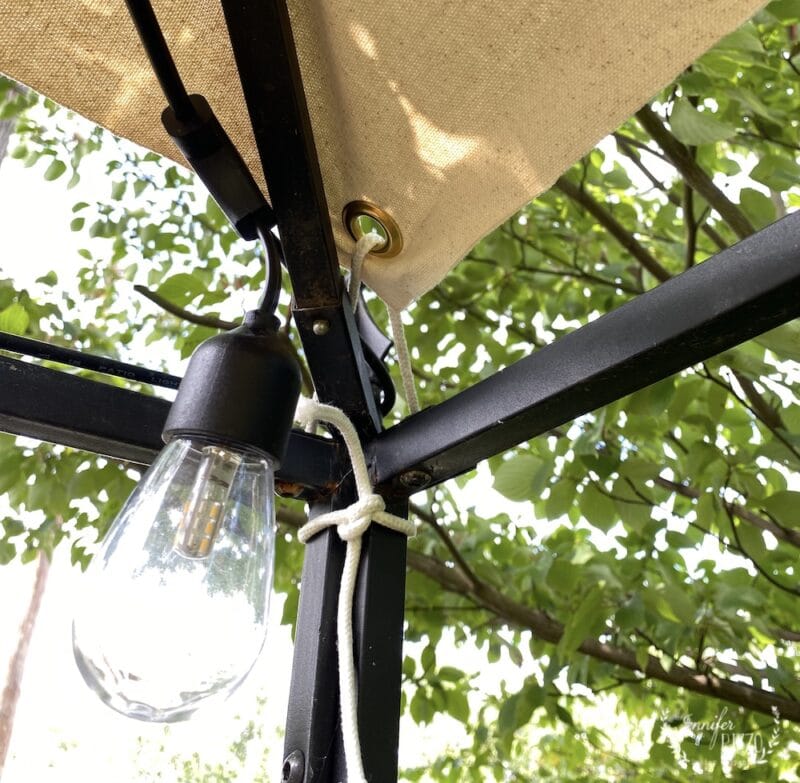 We draped the canvas so it overlapped at the gazebo top. I wanted there to be some venting at the top so it didn’t become a giant sail in heavy winds.  We also tied the ends together on each end to the frame, and also in the middle. 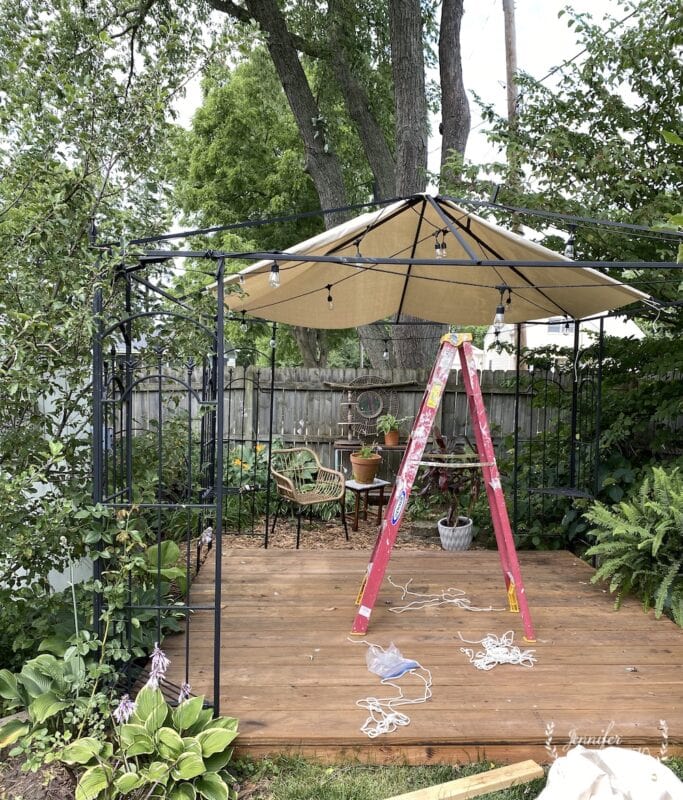 It took us about two hours, but it went up pretty fast once we figured out what points  to anchor the canvas at. 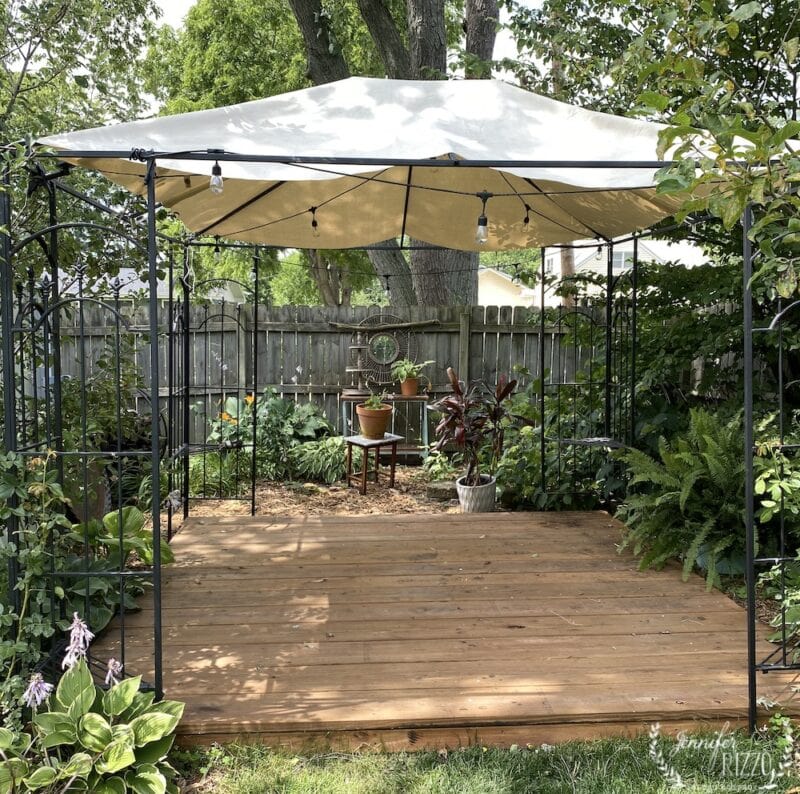 If you are worried about any gap at the top, add a few stitches to hold them together before putting the canvas up. I did secure the first piece of cotton fabric to the canopy with a little rope so it wouldn’t slide down. I kind of rolled the top together a little and folded it around one of the beams. 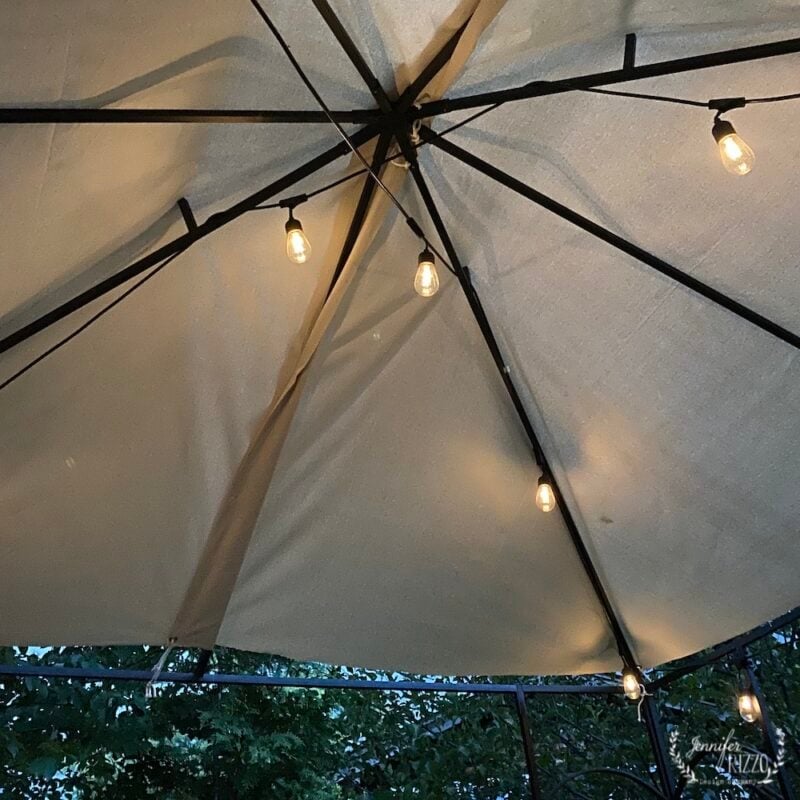 After they were up and secured, I gave the deck a really good scrubbing. 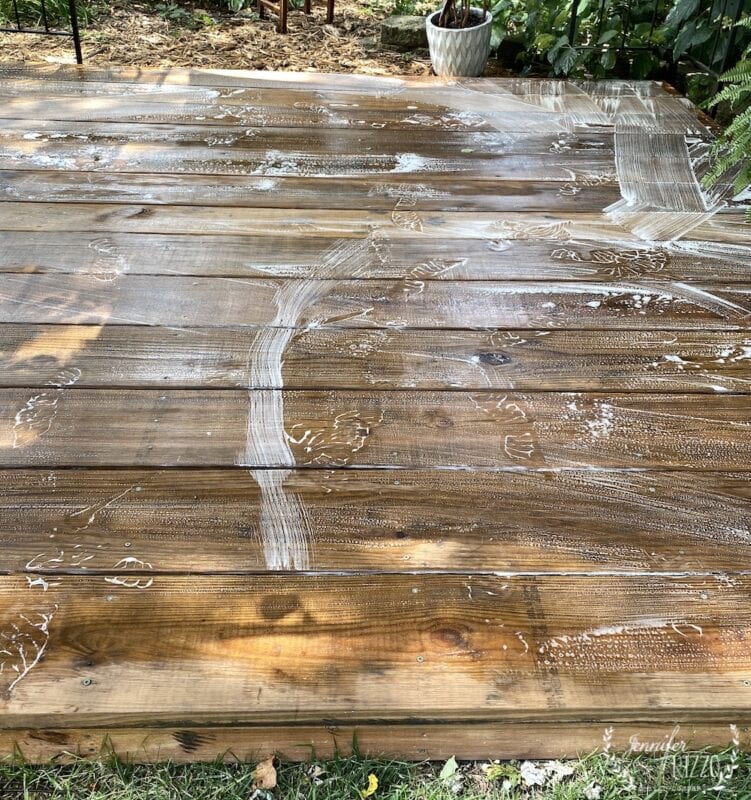 I like how loose and casual it is. So far it’s made it through a few rains and been ok and held together. That’s a win. 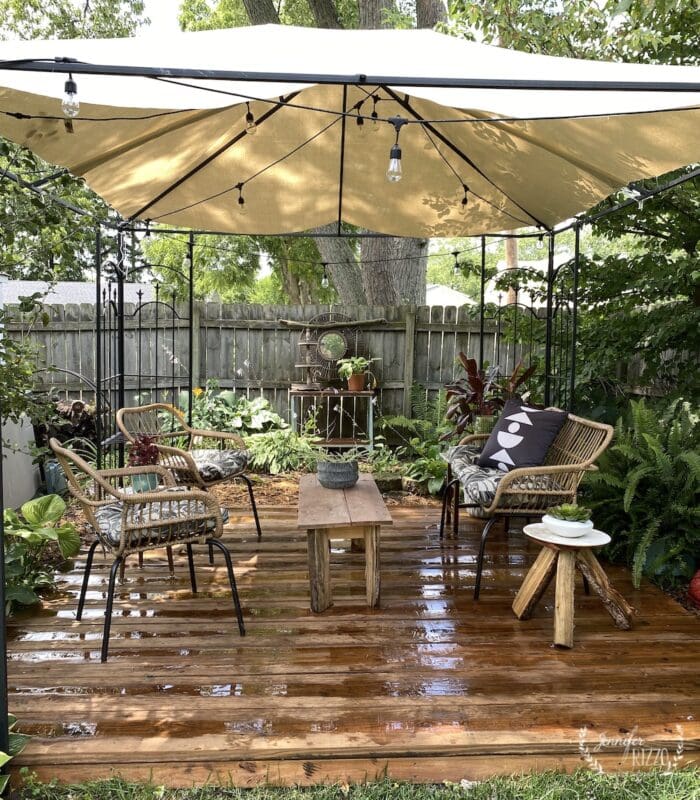 I wish I had done this earlier in the summer, I actually enjoy being out there so much more now. It’s shaded from the sun, and I can even sit out there in a light rain and read (which I love.). 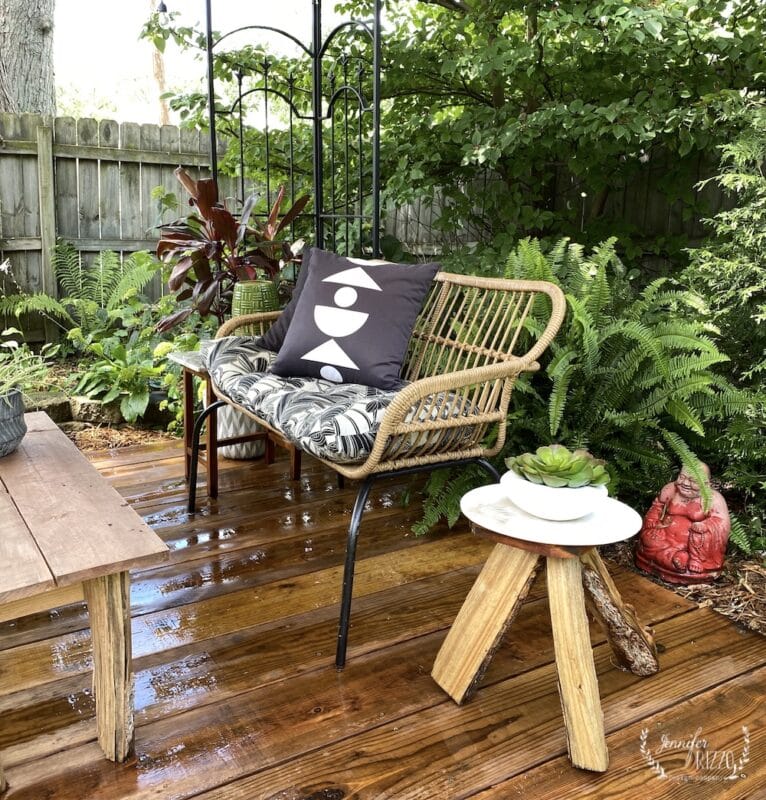 And it’s really cut back on the bird poop issue too. Lesson learned. 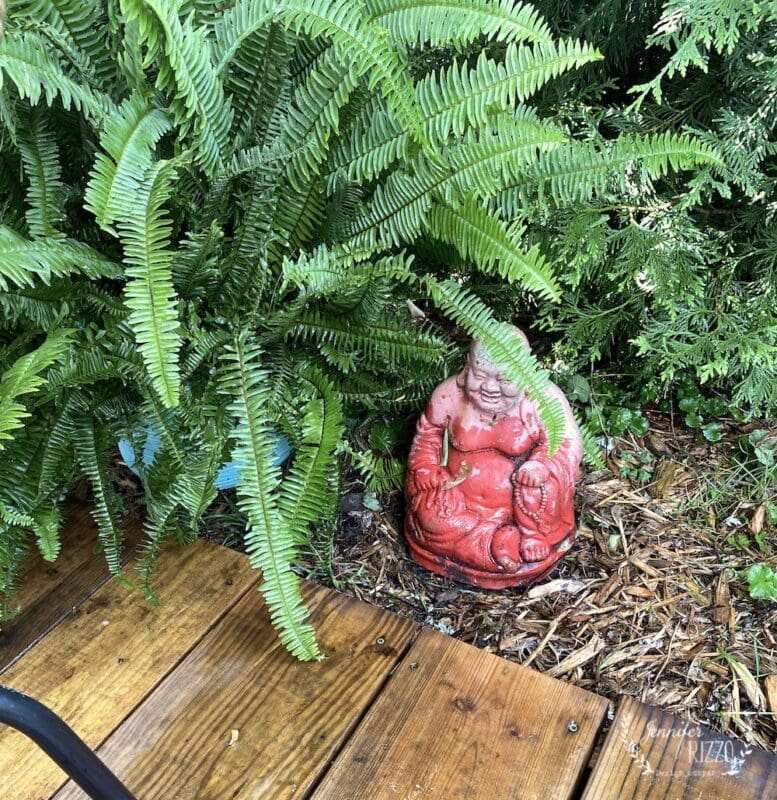 I have to share my little Buddha with you. My aunt painted it years ago and it sat in front of her house. They were worried about someone stealing it so it’s filled with concrete and weighs about 40 pounds. When she passed away I took it, and he’s been hanging out in my garden ever since. I am pretty sure he is laughing at me not having a canopy on the deck in the first place. 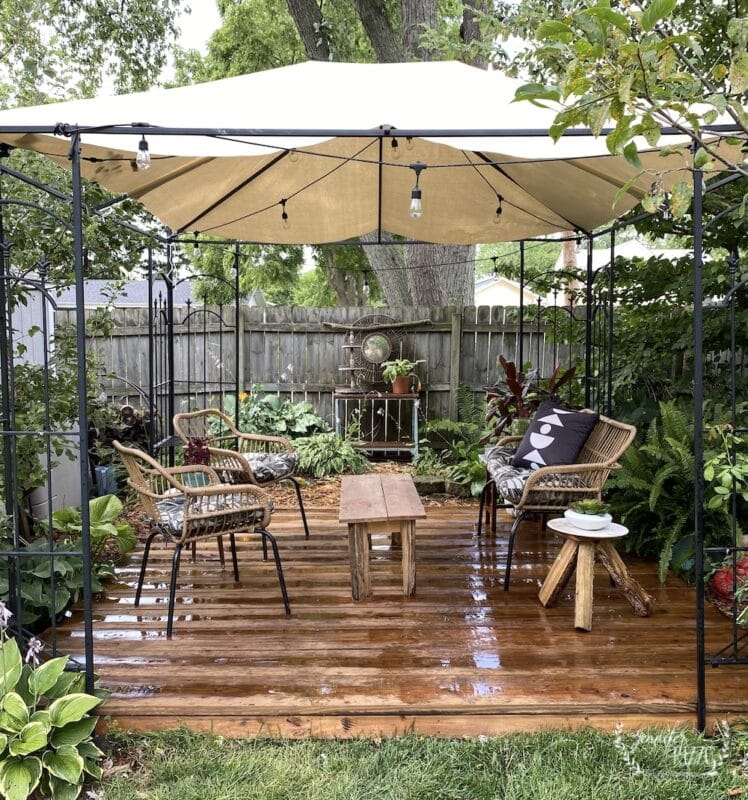 You can find the  shopping resources for our deck area here.

and one of  our favorite lemon rosemary grilled chicken recipe.