A wise man once said “Life moves pretty fast. If you don’t stop and look around once in a while, you could miss it.” Now that wise man just happens to be Ferris Bueller. Even though he’s a fictional character, his words ring pretty true. With that in mind, besides sharing with you how to DIY a vintage inspired factory cart, I also have some pretty big news. 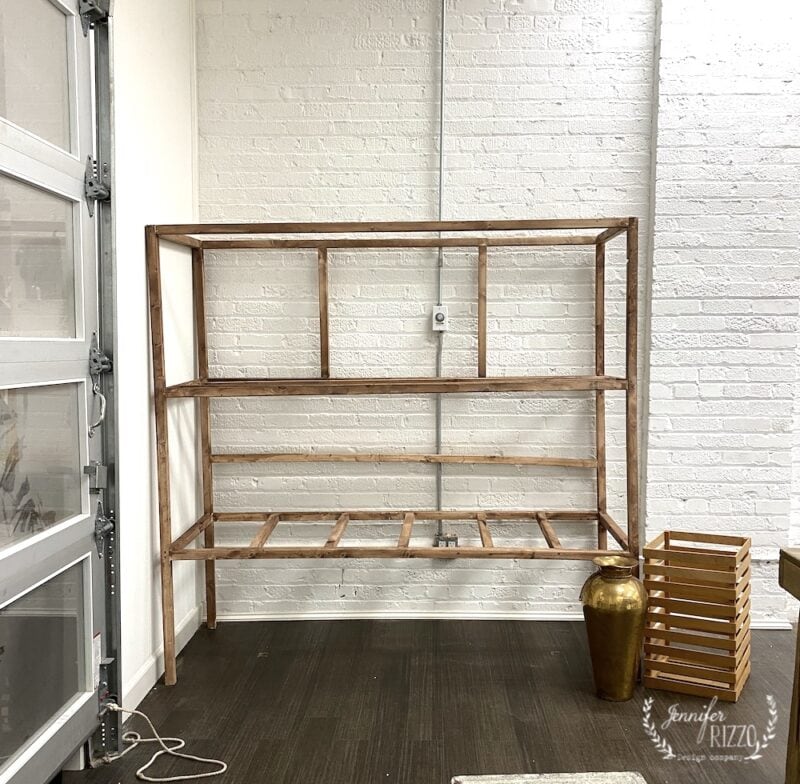 One thing I really wanted to focus one moving forward was my own artwork and design. These last few months at home has really given me time to stop and look around and be quiet, and just listen. I still had a yearning to still sell and design my own things. While I love being online, I also knew I needed a place where someone could physically go to buy larger artwork I was creating. My friend Mark from Warehouse 55  in Aurora, IL asked me if I would be interested in having a spot in his amazing store where I could sell my art and teach workshops. 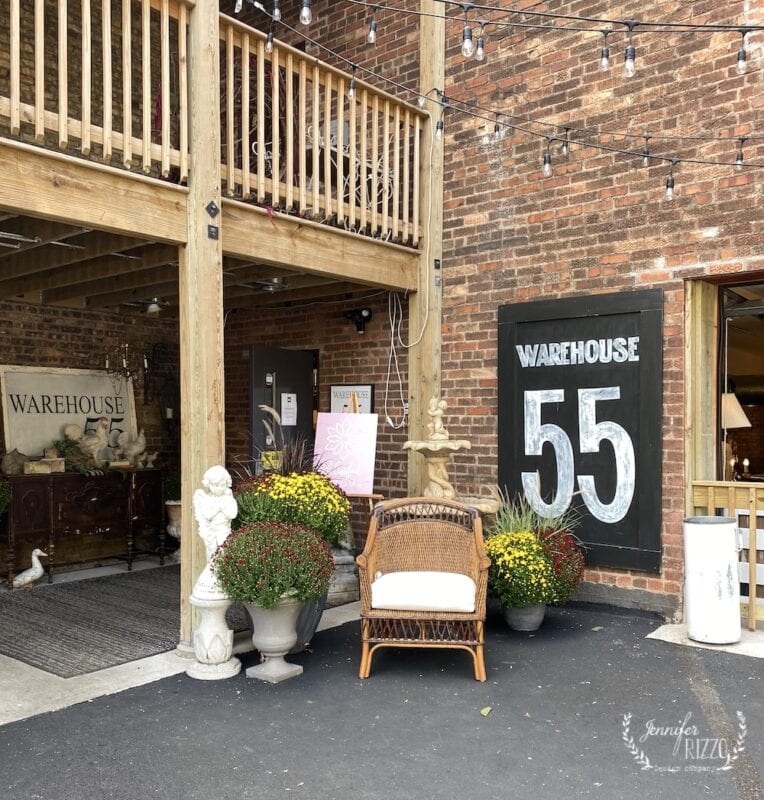 After really considering it, praying on it, and talking to my hubby about it, we thought it was a  good time to give it a try.  I’ll be opening my own little store front at Warehouse 55 on the upper level. It will have my artwork, soft goods, hand-painted decor, handmade items and a smattering of vintage. I’ll also be able to teach workshops there too! 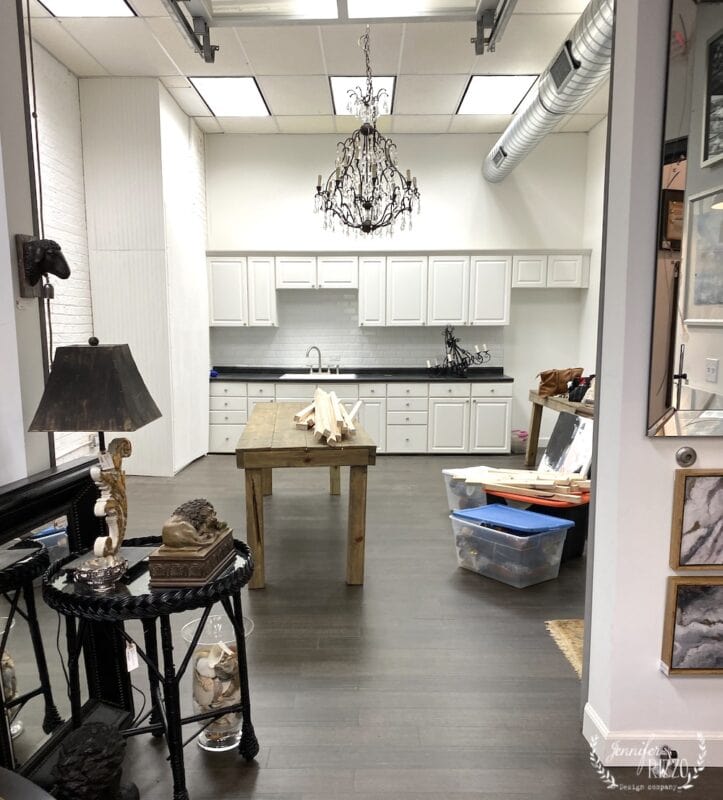 It’s an exciting and scary new adventure! One thing I did need was display pieces. Most of the pieces that were mine from the store were either re-used in the studio space, or we took load after load to Goodwill. There was kind of an “oh crap” moment when I realized I didn’t really have any display left. I wasn’t really so excited to drag china cabinet up two flights of stairs either. I knew I could build something, and I love the look of old factory carts, so I decided to give building one a go for my display. 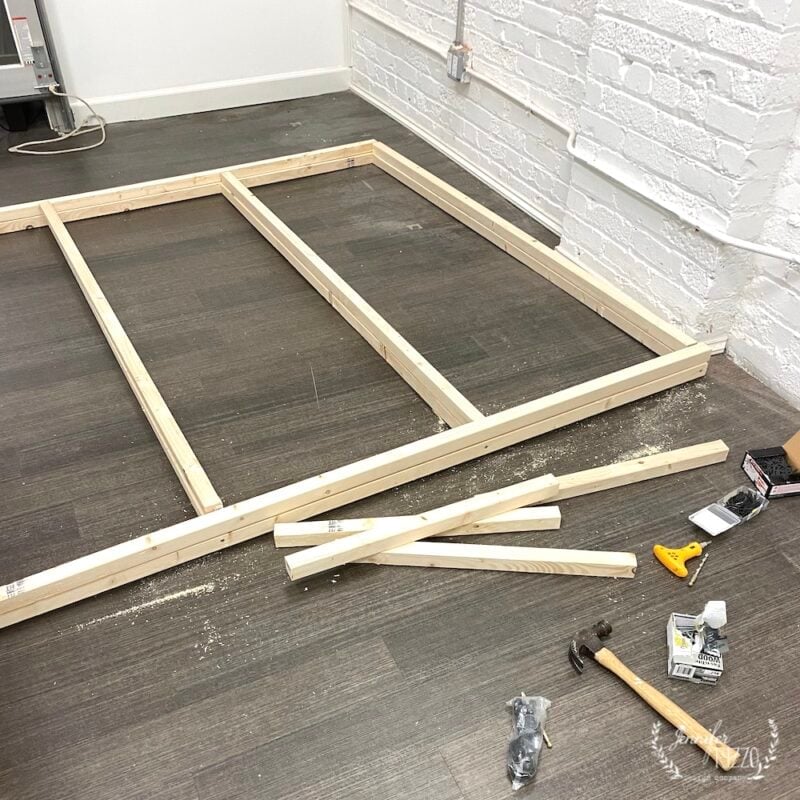 I started by laying out my boards in a basic upside down U-frame and then added the boards for shelving levels between at 18 inch spacing. It’s a pretty simple shape. I screwed the first side together and then laid the second set of boards over the first to mirror the positions. Let me tell you, this job would have been way easier with two people, and I would have had to do way less balancing and trying to line it up. 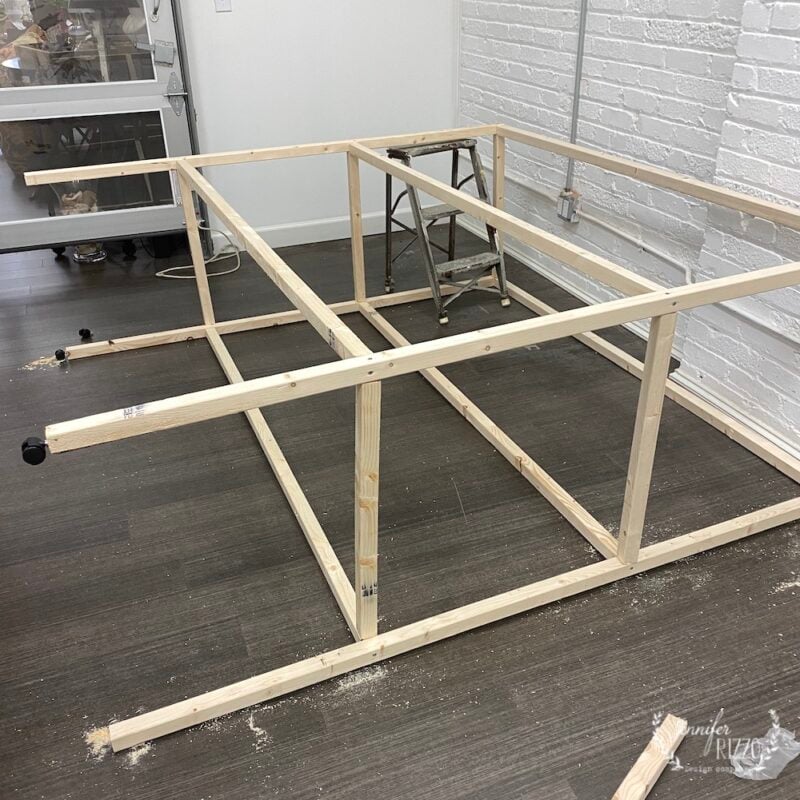 Once I had the two sides, I added the 2 x 2 side pieces. That was the challenge,because I screwed them in from the skeleton on top, but when it came time to screw it in the other side, I had to flip the whole thing up on it’s side, and shorty me had to basically stand on a box to put the whole thing together. Do yourself a favor and find a friend to help you, even if it’s a temporary friend, or someone you pretend is your friend. 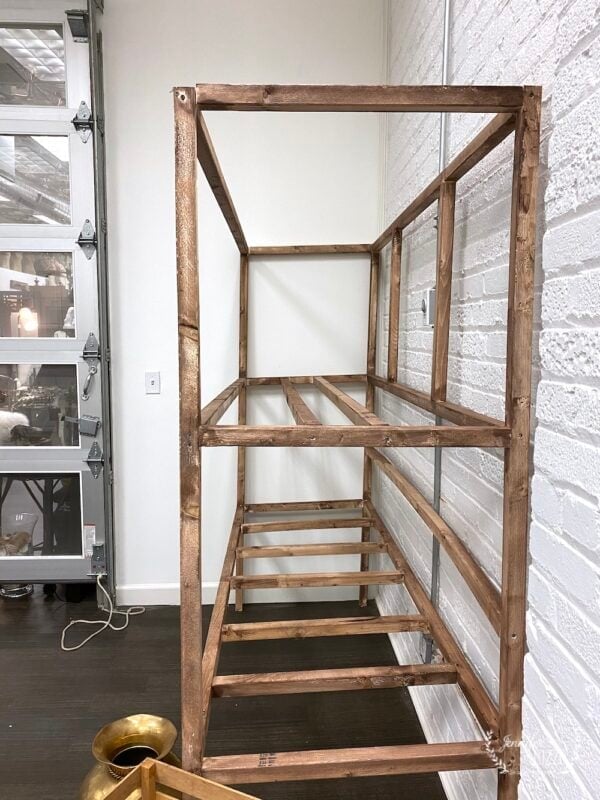 Once the entire frame was together, including some 6 foot 2 x 2’s down the middle center, and 2 foot 2 x2’s on the bottom. I stained the entire shelving unit to give in a vintage look. 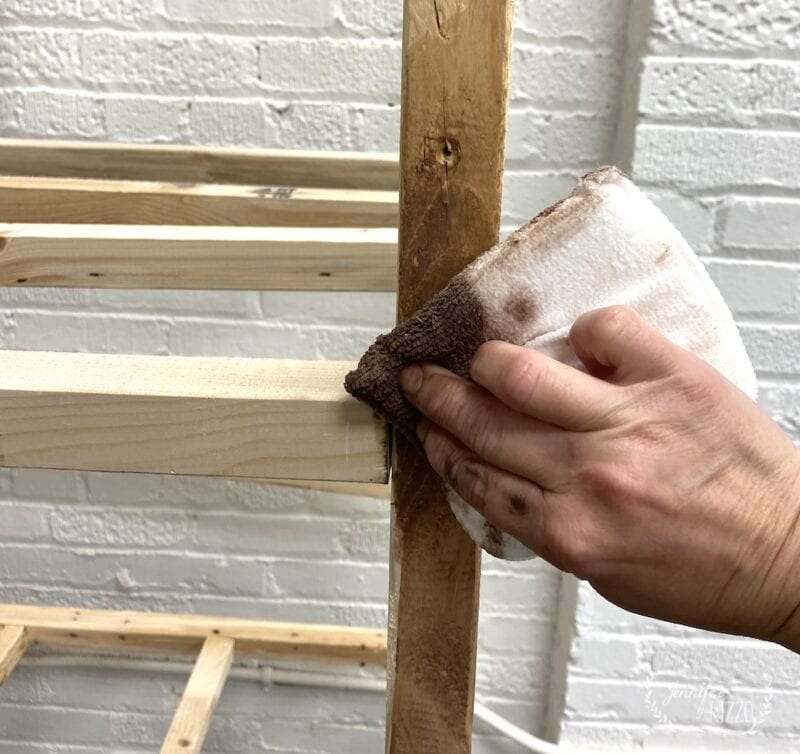 Three things I would have done differently the second time around. I would have only made the cart width about 15 inches with the 2 x 2’s and not 2 feet. It’s pretty BIG. And, I would have had someone help me assemble it. It would have gone faster and resulted in much less swearing. Third, I would have not been so lazy and pre-drilled my holes. Some of the wood did split. She’s a little wonky, but I call that charm. A real vintage one might have a little wonkiness, right? 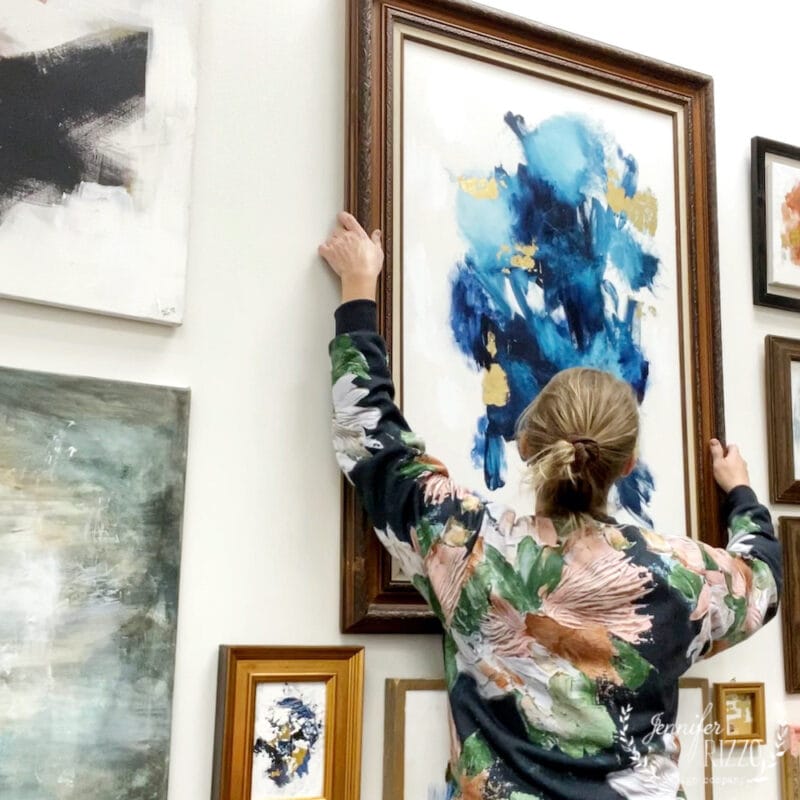 After I stained it, I realized I needed a few more slats on the bottom and added those later after this picture, but all in all, I am proud of my little..ok not so little “cart”. Since it’s so big, make sure to secure it to the wall if you build one. And this is definitely for lighter items. It’s going to be perfect for my soft goods,  like pillows and towels, and it really looks great against the white painted brick!  I hung my artwork gallery style on the opposite wall. 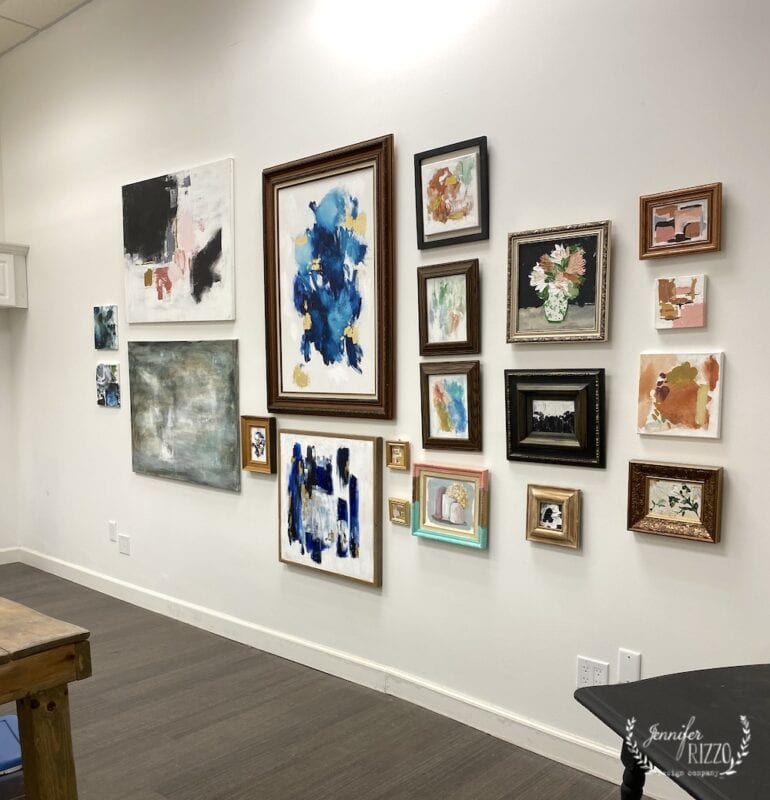 So stop in and see my new space and the DIY vintage inspired factory cart shelving! There are a lot of other great vendors there too! And keep an eye out for upcoming workshops too!