The word is the tile guy is coming on Friday to do our kitchen backsplash, so hopefully I’ll have something to show you next week! In the mean time, I wanted to share a little project I’ve been working on. Turning a vintage french door into a kitchen transom window to add architecture and interest to our space!! 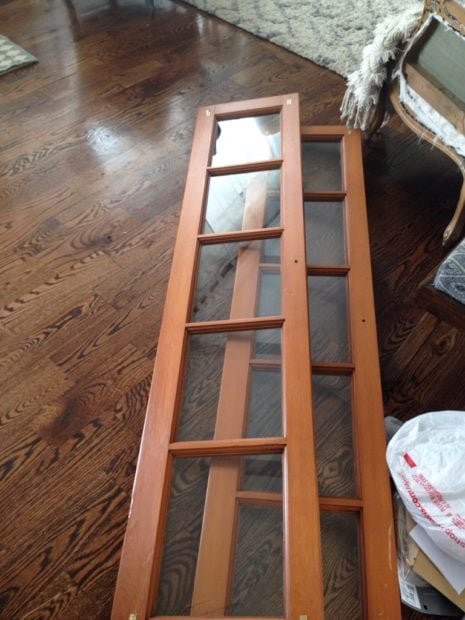 We live near a Habitat for Humanity restore, and quite often, I like to go there and poke around. I was there a few weeks ago, and I found this pair of vintage french doors for $50.  Those things don’t normally last too long there, so I am guessing it was because they were an odd size (72 inches tall.). I grabbed them quickly, because I have been looking for something like that forever!! I’ve wanted to add a kitchen transom window between our kitchen and dining room for ages. I’ve been wracking my brains to figure out the best way to make one, when I came across these. It was an heavens open up, and hands to the sky “AAAAAAAAAAAAAh!!!!!!!”moment!

You might ask me what was there before?  I found one picture before we did our kitchen to show you how it looked before. I’m such a good blogger. 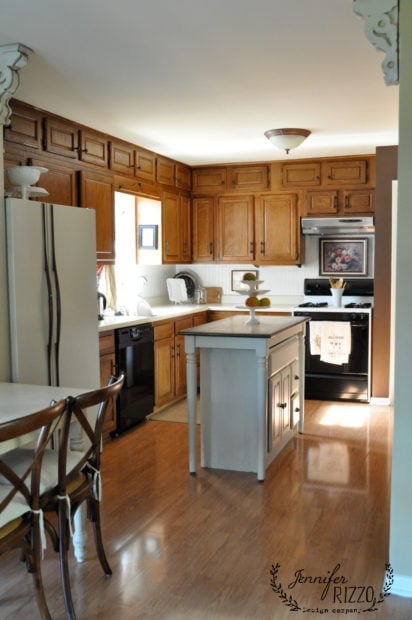 Those Corbels have been up there for over 12 years, but I knew I wanted a transom between the two. It just felt like the room needed something. Our house is a 1950’s split level, so it always feels so blah to me  in the interest and architecture department. 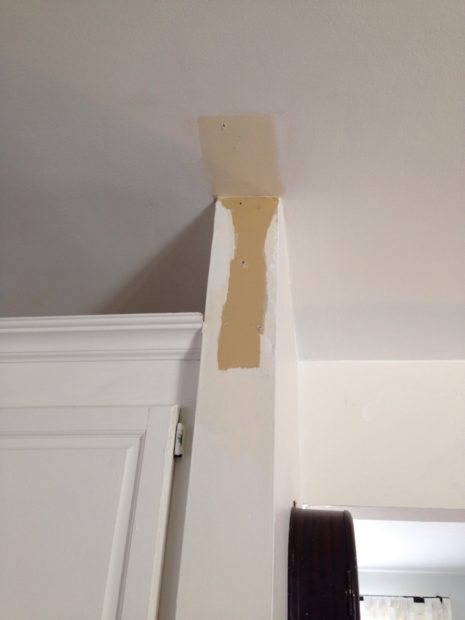 WhenI finally took the corbels down, I found the original wall paint color that we painted almost 17 years ago, and the old ceiling color as well. I love it when I do something like that and the kids go “Eeeeeeewww.. Mom what were you thinking?”

The windows were perfect, but they were 4.5 inches shy of the opening, so I had to hit the hardware store to figure out the wood sizes I was going to need to make up the 2.25 inches on each side. Now keep in mind, I’ve never actually built a transom, I didn’t really know what I was doing. 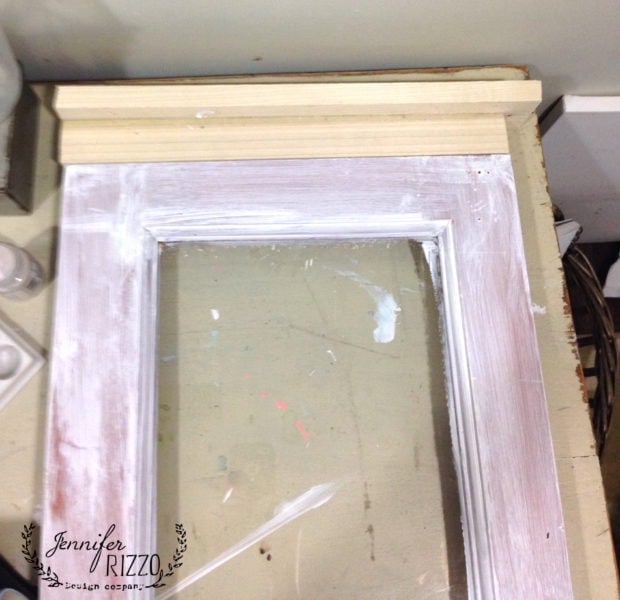 After some mix and match, I found some pieces that worked and used a bucket load of wood screws to hold them together. They lined up almost perfectly, and I figured what didn’t I would hide with caulk and paint. Hubby was working when I hung it, so I had Older teenager hold the a ladder for Middle teenager, so I could screw it in on one side while she held the other side in place on the step ladder. There’s nothing like sweating and straining to hang something, while you have one kid complaining about having to hold it, and the other shaking her ladder under her saying “don’t fall,don’t fall!!!”, while the Middle one then tries to kick her sister for doing that, while you’re yelling at them while  trying to work a drill and hold the other side up. It’s pure magic. I can’t believe it is still up. 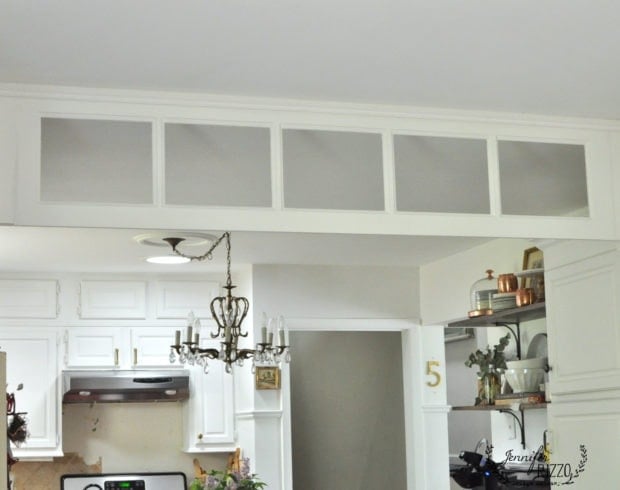 So, I am very excited to finally have a  kitchen transom window. It looks better than I even thought it would! 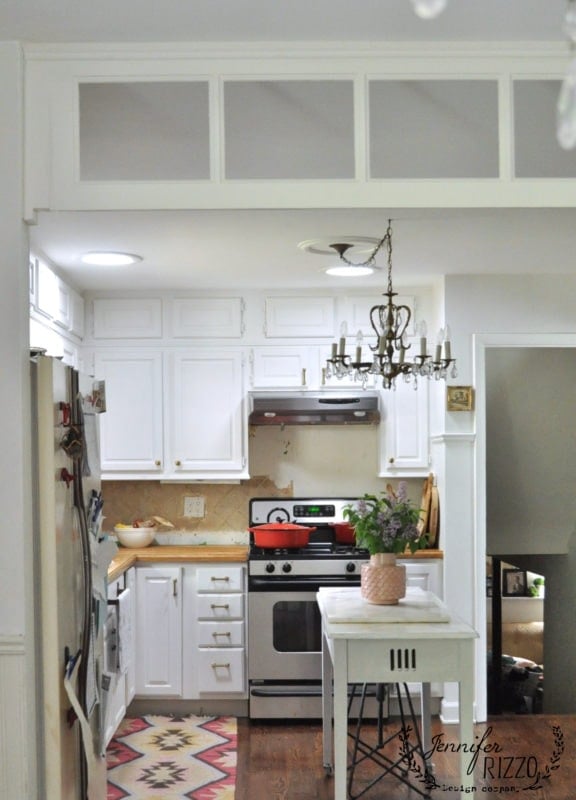 You are also lucky enough to get a rare sighting of Bertha, our 25 year old refrigerator. I normally try to photograph around her. 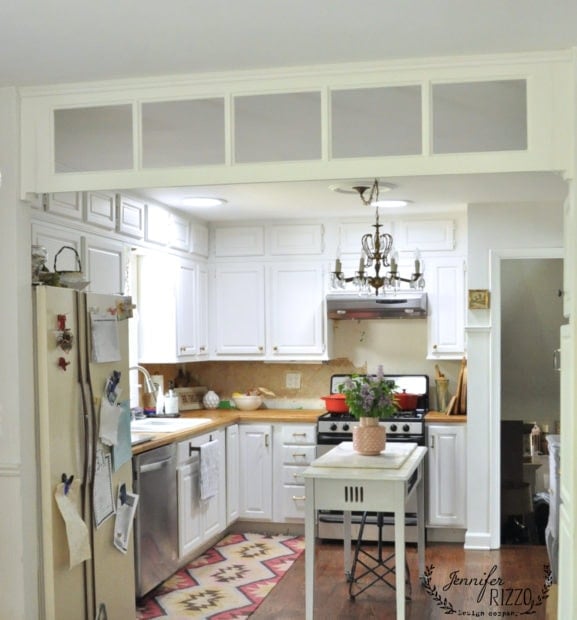 Yep, that’s her, covered in our lives and school papers. She’s pretty cumbersome and not too attractive, but she works.  I hate to say it though, the old girl has almost passed her time.I keep looking for a new one, but that spot is only 33 inches wide, and without moving everything around, we have to find one that fits in that space. We also, have to remove the cabinet above it, because the new fridges are taller, and I am not totally sold yet on a bottom drawer freezer, we are so used to a side by side.An I really want a counter depth. I am looking for a unicorn, and It’s never easy in this house! So, I’ll keep looking until I find one.

I am excited to hopefully share our tile next week!

You can see other ways to add things like beadboard and french doors here for interest!