Skip to content
Do you have  a favorite holiday song? Mine are Breath of Heaven, Grown up Christmas list and Little Drummer boy.
I could listen to those over and over and never get tired of them.
It struck me this week as I was trying to hurriedly get all of my decorating done, and hoping I bought enough for everyone, that  I celebrate and view the holiday’s so much differently than I did even 10 years ago. Even my Christmas song choices have changed. 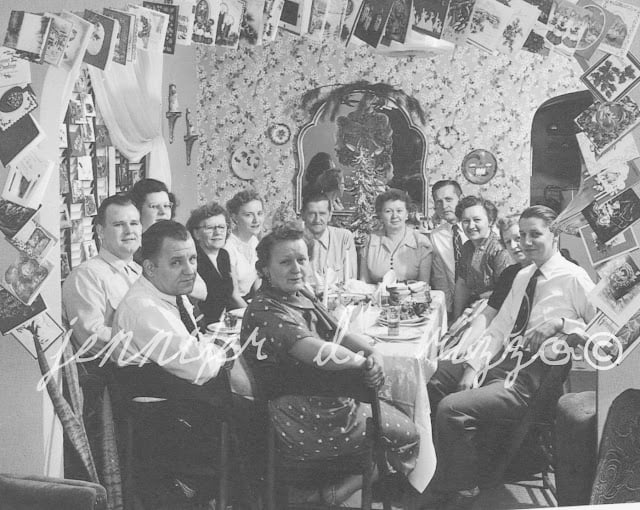 My early holiday memories revolve the whole big, Polish family getting together in my Great Aunt’s basement. She lived with her sister in a 100-year-old two-flat; her on the top floor, her sister on the bottom, and my grandmother across the street. It was the kind of Chicago city street with old brick and clapboard houses, that you used chairs to save your parking space on, and Lord help you if you moved someone’s chair and just parked there…
After Mass in the ‘burbs, we would head out to the “city”. We would all get together, the extended cousins, aunts and uncles in the brick and wood-raftered basement. After climbing down some treacherously steep stairs we would sit at long bingo tables and some really hard, metal folding chairs borrowed from the church and eat and talk, all while basking in the  light of the white metal Christmas tree, adorned with plastic fruit.  The color wheel that would spin around and around and change the tree from red to blue and green. The fruit ended up just looking weird.
We would eat pierogi, sausage, sauerkraut and potatoes, while the women washed the dishes in turn at the two huge concrete sinks in the corner. The cousins would all run around the crowded tables and after dinner, we thought it was so cool that we got to put our pajama’s on and play while we were waiting for Santa. When Santa came, we would each get one gift to open and then try to figure out who he was “this year”.
After Santa, the adults would drink their coffee, and have desert and play cards, mostly Pinochle (I still don’t get the whole knocking on the table thing.). But, they sounded like they were having so much fun eating cookies, laughing and playing with the occasional knock and crowd roar.
Then, at some point, all of the food would come back out again and we’d have  a second dinner, the kids would wind down and everyone would say their goodbyes. In the cold, we’d pile back into our station wagon and head back out to the suburbs. It was the 1970’s and my brother’s and I would lie in the back under blankets and count the street lights as they passed over head. At that time on I-55 there were these really cool  blue street lights and we would just be enthralled. I’d watch them zip by one by one and suddenly, our car would be stopped and I would be home.
Sometime in my teen years, the family became just too big and the auntie’s too old and we broke off into smaller family groups. As I grew older, I realized the way life really worked. Christmas changes. Life changes. It becomes less about “the stuff”  and more about the family by default. Every few years or so someone would be missing and the space they left would be gaping.
For me the first year I really felt it full-on was the year my Dad had passed away. Suddenly it was way less about the presents, I could have cared less.  When my Dad’s mother died  two years ago at the age of 99, it made for a rough season as it kind of hit me that it was the last  connection to my Dad, and suddenly someone who’s been around for Christmas for every year of your entire life was just… gone.
As each person has moved on, the season for me becomes so much more about memories I have and making new one’s that my children will remember; because I know that’s that is what they will have to hold onto when they are my age.
I am finally at a point where I realize that it’s so much more than about the hustle and bustle and decorating. All of those years, I don’t remember any of the presents I received at all. Not a one. When I see childhood pictures, then it’s am “oh, yeah. ” But I do remember the feelings and the people and all of the things that didn’t seem important at the time, but are so important now.
I love decorating and fussing for the holiday’s,  I love singing the music, I love my free pine branches at Home Depot, and I love telling my kids how much I hate blue lights every time we drive past a house that has them. I still cook a traditional  menu for Christmas eve dinner, (but I do have to admit I do cheat and pick up a few things at the Polish Deli.) and we even play board games, and eat cookies with lots of powdered sugar, but it hit me that as a family,we really need to celebrate more like the Little Drummer Boy. He was just someone who gave the most important person of the season the greatest, but simplest gift of all. Just  a bit of himself.
And that’s the stuff that lasts.
Jen
If you are reading this post at any other sites or blogs besides Jenniferrizzo.com, your rss feed,e-mail or in your reader this is stolen content.