Now that the weather has warmed up, we are able to get outside a little more and work on some outdoor projects. One of the projects that has been swirling around in my mind for a while was what to do with a problem area in our backyard. It was an area behind the shed that just collected junk, and the grass didn’t grow very well.  Ages and ages ago, we had a garden there and  a tadpole habitat, until the tree became too big and cast too much shade. Now as the perfect time to turn it into a useful, relaxing, retreat-like area and and pull out our old metal frame gazebo from the shed and build a free-standing platform deck underneath to create a little suburban oasis for ourselves. 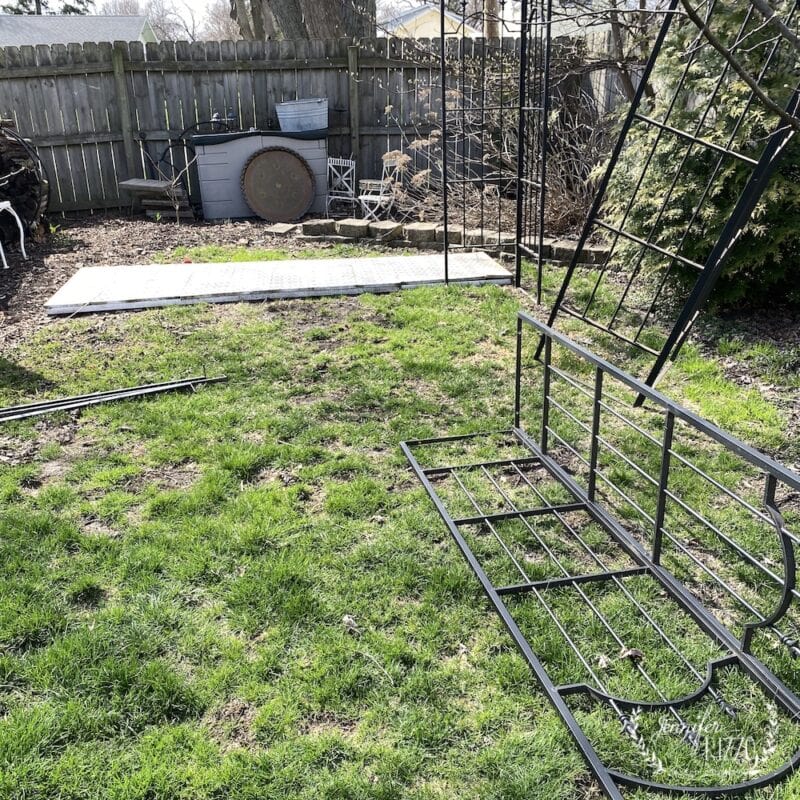 We started by measuring out the space underneath. We bought  about $300 in lumber to make the wood platform.  Even though it’s a 10 x 10 gazebo, we found it measures less on the inside of the frame and the 10 x 10 is to the outside of the metal frame, so we had to adjust our cuts appropriately so it would all fit inside. 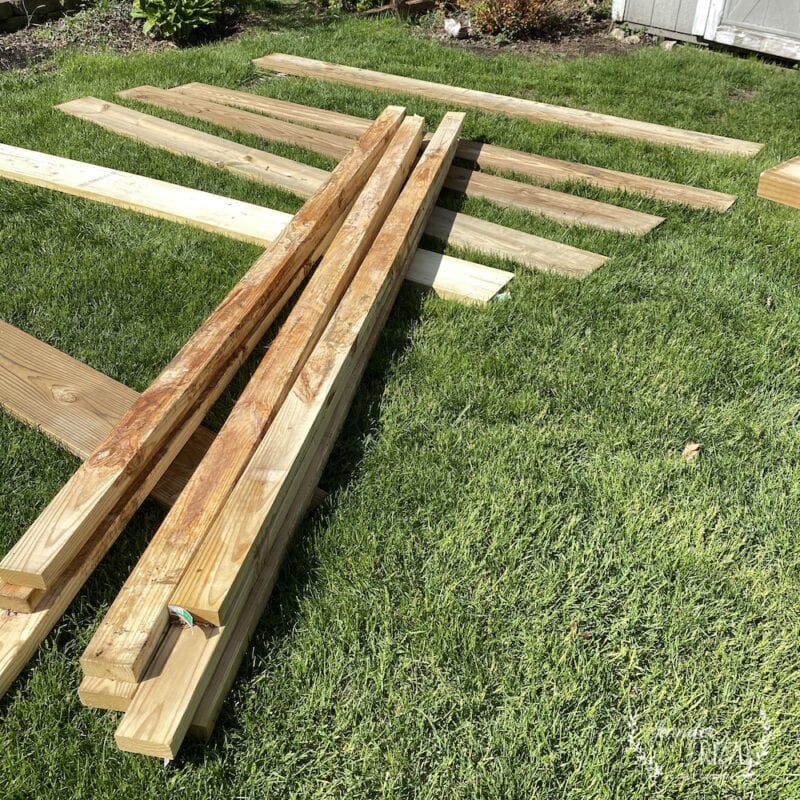 We started by building the framing on the ground. We aren’t carpenters by any means, so instead of measure twice, cut once, it was measure four times, hopefully cut it right once! 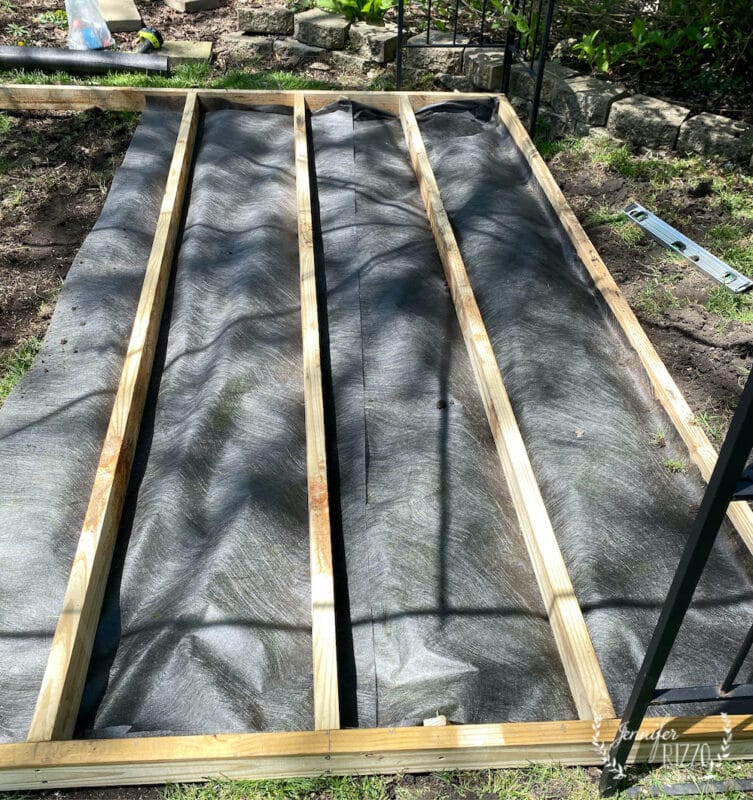 We added landscape fabric under the framed section to keep the grass and weeds  from growing through from the underside. 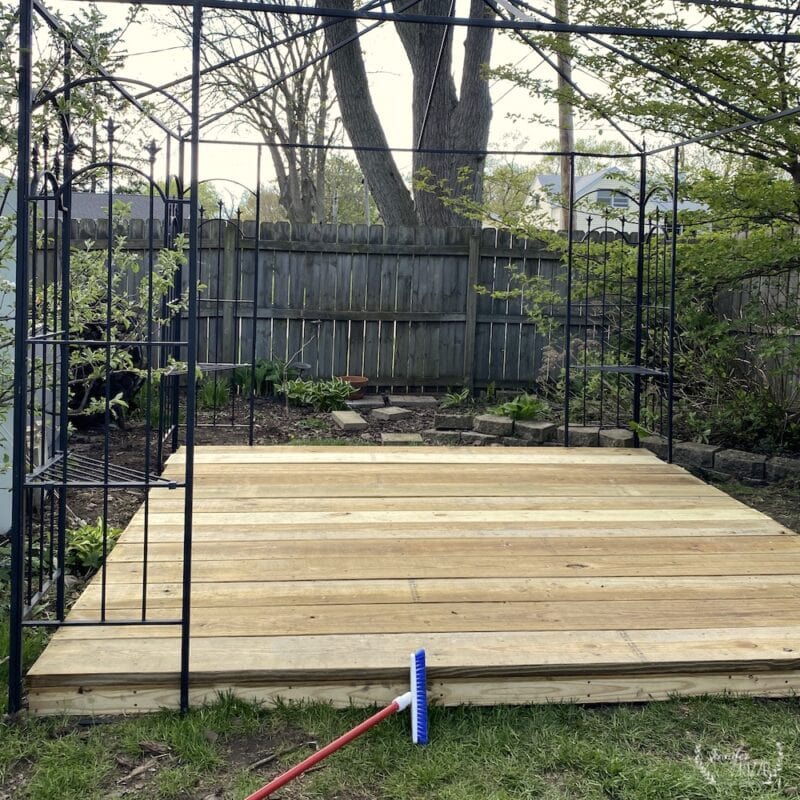 We managed pretty well, and there are just a few small mistakes we made, but they aren’t noticeable to the eye. Once we had the platform built and cleaned off, we  let it dry out and then used a transparent sealer. I had to wait for a warm day with no rain in the forecast, so it took a little patience on my part. 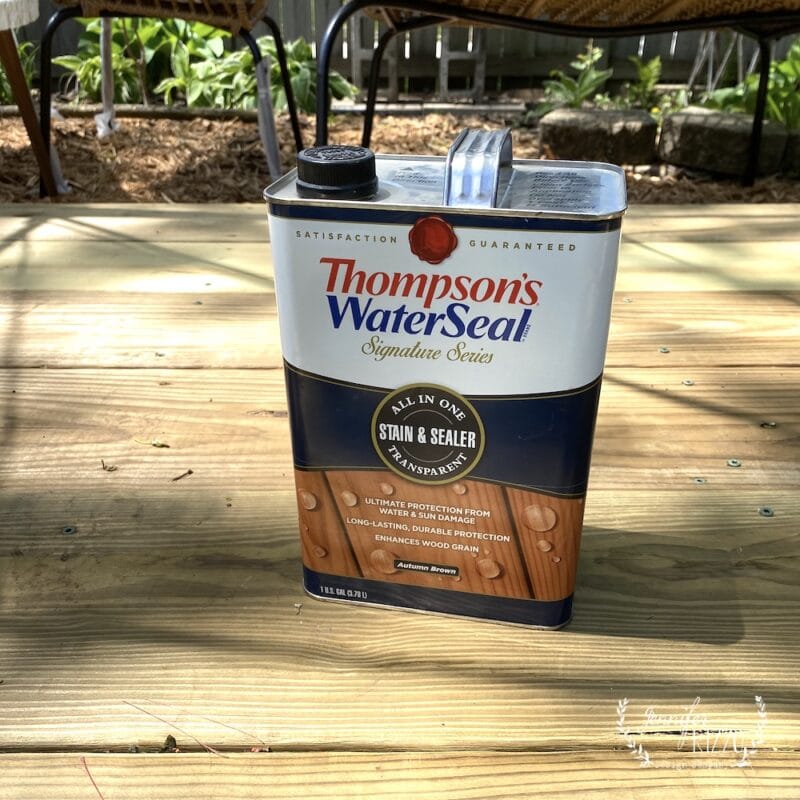 I ended up picking this transparent sealer (not sponsored) not only because it was the most cost effective, but when I looked at the samples in the store, it was closest to adding some natural color without looking like a “fake” wood color. It also only needed one coat, which was a win in my book. I read all of the instructions and put on gloves, eye protection and a mask before I tackled the task. 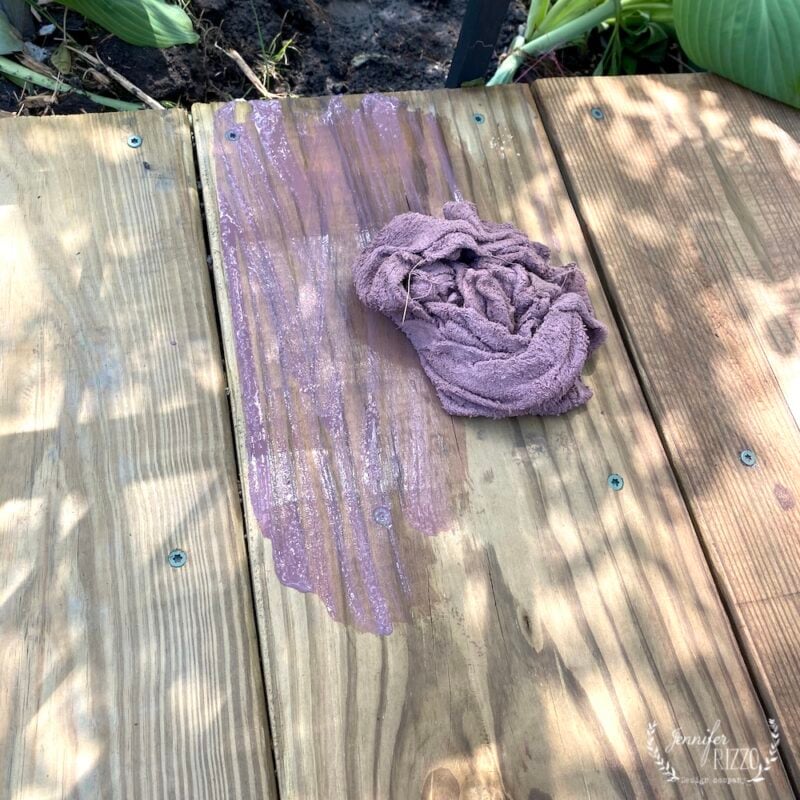 I have to admit, I got a little nervous when I started applying it. It came out of the container looking very purple-y. Luckily as it soaked in and dried, the color became a really pretty, light brown. 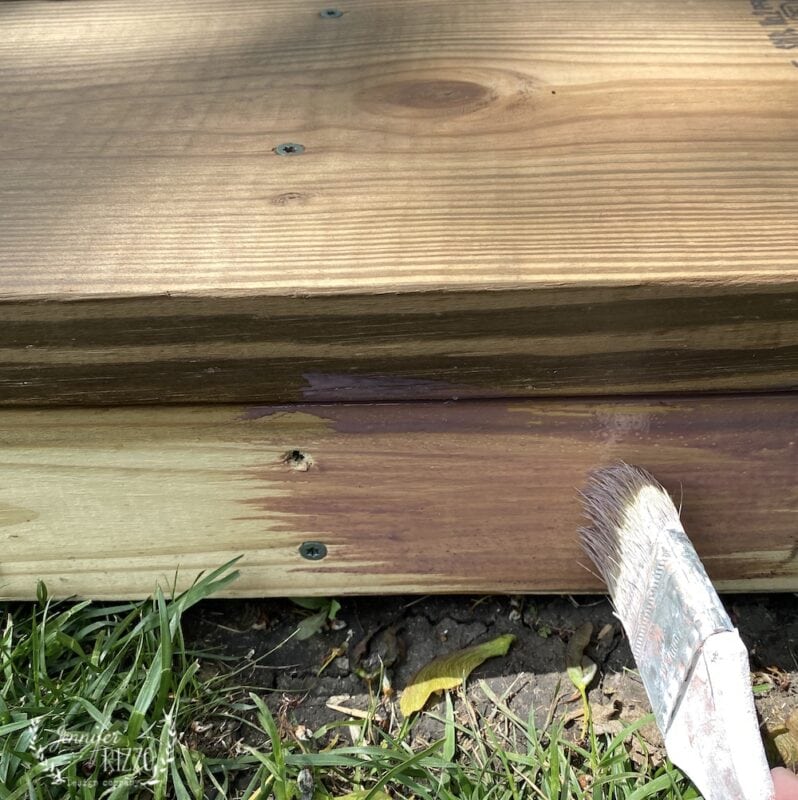 You can really see the difference when it’s next to an already completed area. It took about 30-45  minutes to seal the deck and then a few hours to dry. 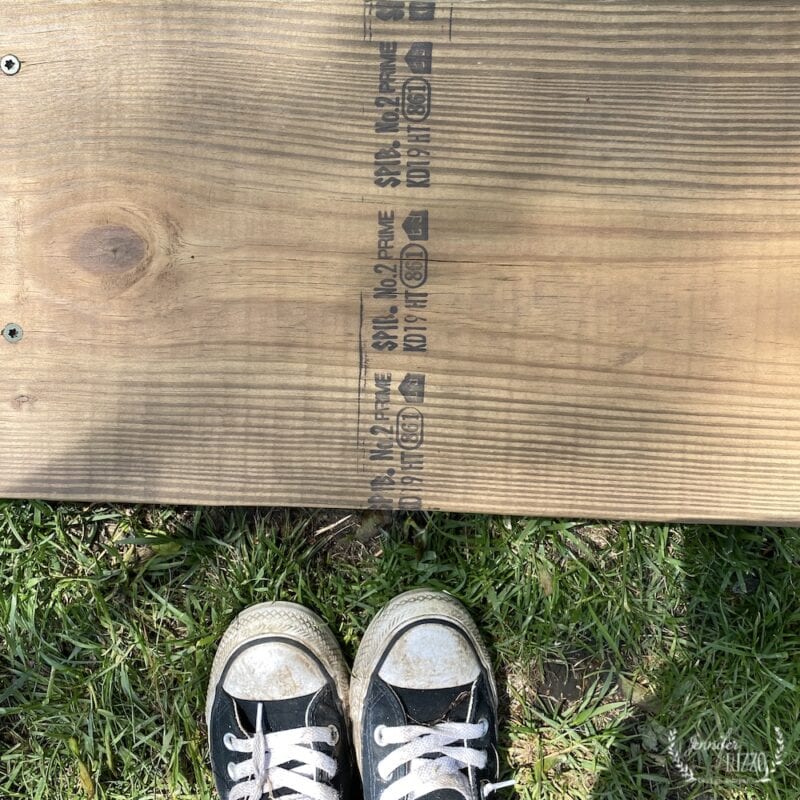 We made one HUGE boo-boo though when we were laying the boards. I didn’t pay attention to which side had the printing on the lumber, and only noticed it after.  By then everything was done, and boards were already cut to size. Luckily, it’s only on a couple of boards, so now it will just be a “quirk” I will embrace. I’m OK with imperfection. 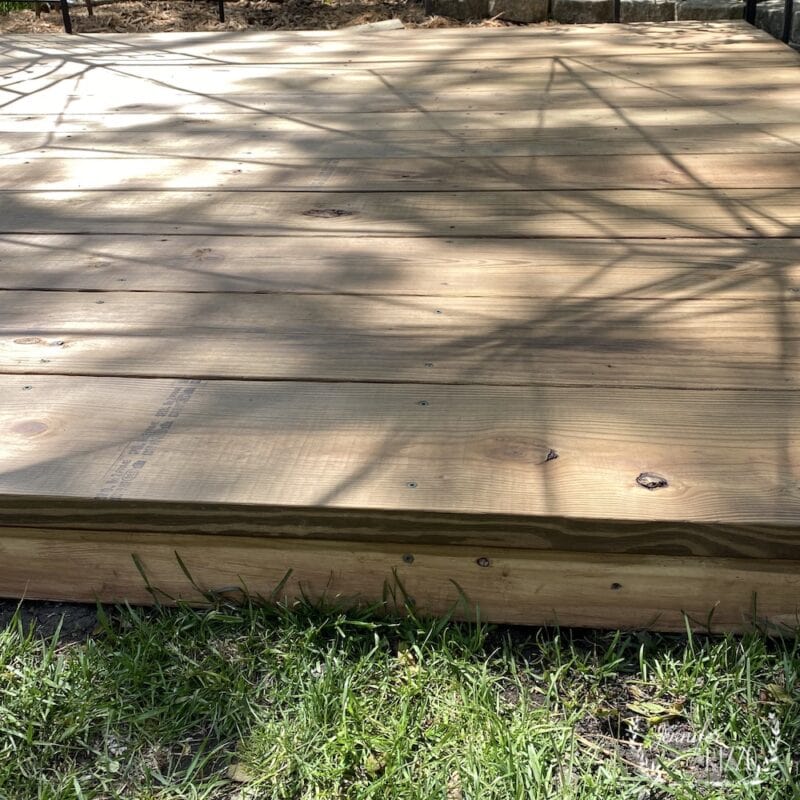 Now that the boards are dry, I’m ready to move onto step 2, which is the fun part! The styling! I am going to figure out a gazebo covering, since the mice ate the other one in the shed. 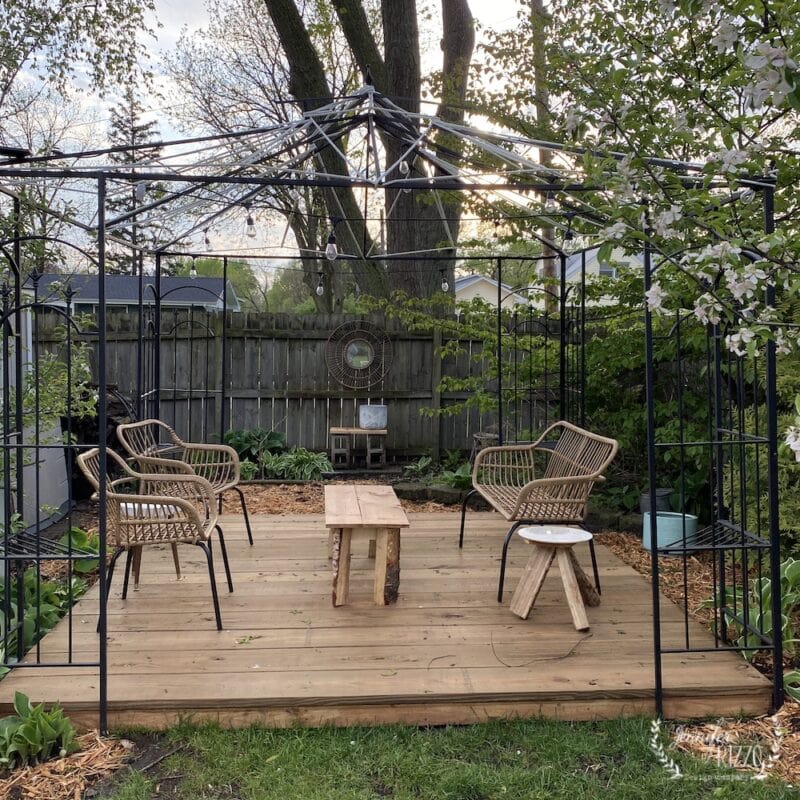 I bought the chairs and outdoor loveseat from Target, and I’ll share a little more about the tables in another post.

Do you have any outdoor projects you are working on or starting to tackle? If you loved this post, make sure to check out this deck styling post. 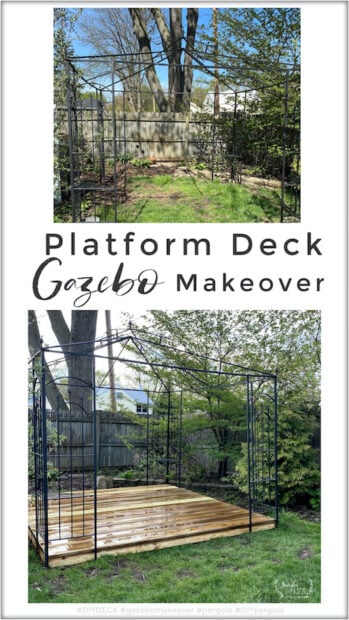